https://twitter.com/i/web/status/1320455959374909442
A glowing fireball exploded in the night sky in Puerto Rico around 7:45 UTC on October 17, 2020. The trajectory suggests that it moved over the Mona channel towards Desecheo, according to the Caribbean Astronomy Society (SAC).

I remember that C's said that the Ice Age will come, much, much faster than the scientists think...

For now, I see a lot of articles that suggest that we can expect an Ice Age after 2030.

If we assume that 2030, it is what "scientists think", and it has to will be relatively faster than they think... and add to that, what is currently visible worldwide.

Heavy rains and floods in Valencia, Spain, on November 5th.

SOTT has published this article about a bright fireball above Mediterranean sea, south of Spain's coast, on Sunday morning, November 8, 2020: 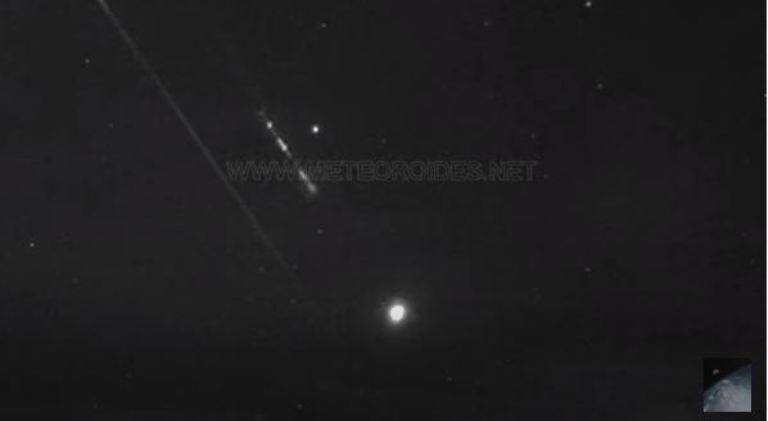 This beautiful meteor spotted from Spain overflew the Mediterranean Sea on 2020 November 8 at about 4:13 local time (equivalent to 3:13 universal time). It was generated by a rock from Comet Encke that hit the atmosphere at about 101,000 km/h. It...

The following day the Astronomical Institute of Czech Republic published report on its FB page about a very bright meteor - bolide (brightness of full moon) which travelled athrough the atmosphere above the northern part of the country around 6:11 PM (5:11 PM UT), again November 8. It was reportedly observed from the entire Central Europe.:

On Sunday, November 8, at exactly 18 hours 11 minutes and 2 seconds of Central European time, a meteoroid weighing approximately 20 kilograms entered the Earth's atmosphere and began to shine at an altitude of 88 km above Hejnice in the Jizera Mountains. At that time, the body was moving at a speed of 16 km / s and along a very steep path inclined to the earth's surface of 77 degrees, it continued to fly in a southeasterly direction and gradually brightened.

The maximum brightness, which corresponded to the brightness of the full moon, was reached by the bolide in a short brightness at an altitude of 33 km. At this stage of the flight, the meteoroid also braked sharply in the atmosphere and also disintegrated. He flew the entire 70 km long light track in 5 seconds and extinguished at a height of only 20 km above the southern part of the Jizera Mountains. One larger fragment and several small fragments, of the order of ten gram and gram, could have landed on the earth's surface. Before the collision with the Earth, the meteoroid orbited the Sun in a slightly eccentric orbit, which was inclined less than 20 degrees to the plane of the ecliptic, ie the plane of the Earth's orbit. In the sun, the meteoroid was only slightly closer to the Sun than the Earth's orbit, and in the sun it was only slightly behind the orbit of Mars.

Most likely it was part of an asteroid originating from the inner part of the main asteroid belt. Photo: Excerpt from an all-sky image of a car from November 8, 2020 taken by an automatic digital car camera of the Czech car network at a site on the premises of the Secondary School of Economics and Forestry in Frýdlant in the Czech Republic. Interruption of the light trail of the car (16 times per second) is caused by an electronic screen and allows us to determine the speed of the car (photo: Astronomical Institute of the ASCR).

On top of that, The American Meteor Society has these reports of sightings on the very same day, November 8, one observed from close to Philadelphia (USA) at 7:22 PM (local time perhaps) and the other recorded between Dutch cities Leeuwarden and Groningen at 5:14 AM CET (4:14 AM UT):

All the rocks probably came from the South Taurids' meteoric stream, debris of comet Encke, which the Earth passes through every year in the beginning of November but considering the recent 'traffic' up there, who knows. In any case it was a very lively day for the Northern hemisphere.


Edit: Just found a video of the Czech fireball as seen from Germany:

On 16 November 2020, at about 3:49 local time, a beautiful and very bright fireball was spotted over the south of Spain. This bolide was generated by a rock from a comet that hit the atmosphere at about 227,000 km/h. The fireball began at an altitude of about 132 km over Andalusia (south of Spain), and ended at a height of around 61 km over the south of Portugal.
Click to expand...

FOTCM Member
https://twitter.com/i/web/status/1329394187905556480
It looks like a bright meteor that flowed at 19:57 on November 19, 2020 was seen with a wide-angle camera from Hiratsuka to the northern sky. It wasn't bright enough to be called a fireball, but it flowed slowly for a long time. It was a scattered meteor.

The brightest of them (Event #1 on video) was spotted at about 2:32 local time (equivalent to 1:32 universal time). It was generated by a rock (a meteoroid) from Comet Encke that hit the atmosphere at around 101,000 km/h. It began at an altitude of about 105 km over the province of Jaén (Andalusia), and ended at a height of around 52 km.

Previously, other two fireballs were recorded, at 1:47 and 2:21 local time, respectively (Events #2 and #3 on video). The first of these (Event #2 on video) was generated by a rock from another comet that entered the atmosphere at 202,000 km/h. It began at a heigth of 108 km over the Mediterranean Sea and ended at an altitude or around 72 km off the coast of the province of Almería (Andalusia).

Finally, the bolide recorded at 2:21 h (Event #3 on video) was also produced by a rock from Comet Encke entering the atmosphere at 101,000 km/h. It began at an altitude of around 111 over the province of Ciudad Real, and ended at a height of about 71 km.
Click to expand...