https://twitter.com/i/web/status/1307695953743433731
Huge and unexpected wave coming from the river #Qiantang in #China crashed and dragged several cars on a roadside in Hangzhou Zhijiang this Sunday afternoon.
Via @globaltimesnews

FOTCM Member
I was looking for this one on SOTT but no one has posted it yet, neither there or here. Impressive show.

Ecuador’s active Sangay Volcano exploded in dramatic fashion over the weekend, firing volcanic ash high into the atmosphere — the explosion was a number of times stronger than those previously observed during the volcano’s recent uptick.

The ‘high-level’ eruption occurred at 04:20 local time on Sunday, September 20 and generated a dense, dark ash plume, but the ‘biggie’ was sandwiched between numerous other powerful blasts that occurred throughout the weekend:

Also, there is this dramatic video of explosion, allegedly of this event but I was not able to verify it really is the same explosion. No other source mentioned lava burst of this magnitude. Hopefully Spanish speaking members can confirm or dismiss it:

FOTCM Member
Sorry for the missing link, the Sangay volcano article from Electroverse is here.

Moderator
FOTCM Member
Earth opening up (from Strange Sounds website). Seems to have been noticed by the locals around September 15th.

FOTCM Member
https://twitter.com/i/web/status/1308870953733181445
Hikers shaken by the passage of the #tornade on the island of #Oléron this afternoon. They are located only a few meters from the phenomenon. Awesome images! Video credit:@BFMTV #météo#CharenteMaritime


https://twitter.com/i/web/status/1309119087868604421
A #trombe marine circulated off #Cavalaire , in the #Var , around 1:40 p.m. At the #inverse from that of #Oléron yesterday it did not make landfall and therefore did not turn into #tornade . A snorkel (tornado not touching the ground) was also observed towards Roquebrune..
@LCI

FOTCM Member
Seem to be a lots of waterspouts about lately. 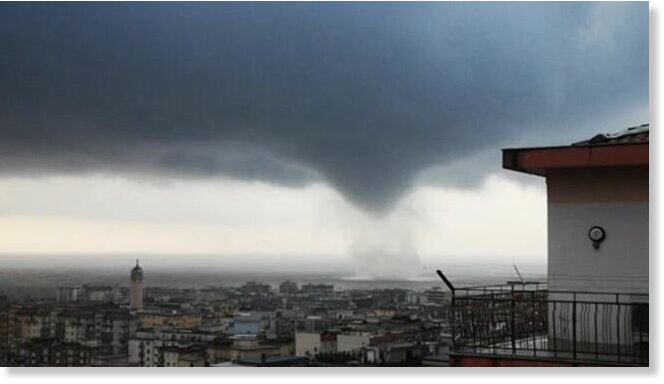 A giant waterspout came ashore in the Italian city of Salerno on Friday, September 25, uprooting trees and causing minor damage to vehicles and buildings, according to local authorities. A Facebook post on Mayor Vincenzo Napoli's page said that...

This bright meteor overflew the south of Spain on 2020 September 25 at about 23:52 local time (equivalent to 21:52 universal time). It was generated by a rock (a meteoroid) from an asteroid that hit the atmosphere at around 39,000 km/h. It began at an altitude of about 80 km over Seville, and ended at a height of around 26 km over Córdoba.
Click to expand...

FOTCM Member
22 September... Perhaps was this one Meteor fireball streaks over Western Europe

FOTCM Member
https://twitter.com/i/web/status/1309874511416877057
https://twitter.com/i/web/status/1309802115443851264
So we have snow today the Refuge @FEEC_cat of Certascan, one of the places of the #PNAltPirineu where it usually precipitates more when storms from the north come, when the clouds collide with the massif of the #PicadEstats located further south and become stagnant in the Valley of #Lladorre

A very bright fireball turned the night sky into a day as it exploded over the Rio Grande do Sul and Santa Catarina, Brazil, at around 04:03 UTC (01:30 LT) on October 1, 2020. The American Meteor Society (AMS) received 35 witness reports, while the Brazilian Meteor Observation Network (BRAMON) was able to capture the phenomenon.