Laura said:
If I remember correctly, the C's remark was given in the context of a discussion of finances.
Click to expand...

Wandering Star said:
Yes, it can be a "moment of inflection or change".
Click to expand...

Neil said:
I agree with those who say it relates to the petrodollar and the unveiling of Putin's resource backed currency. Like when they predicted 0 New Year back in 2014, nothing spectacularly transformative happened immediately, though it creates a point of divergence which gains momentum over time along a different trajectory
Click to expand...

Yes I think this april 2022 is going to be remembered in the "future" as part of the zero year.

The signs are there to see them, starting with the petrodollar problems, the end of Globalization announced by BlackRock CEO Larry Fink, the end of the unipolar world announced by Putin and without a doubt and as a consequence of all the above, the collapse of the supply chains.

It's an april dead drop in slow motion.

Something big is coming in my opinion. One in five container ships is now stuck at ports worldwide, with 30% of the backlog coming from China 🚨 https://t.co/FZU7L9kHhE
Click to expand...

President Xi Jinping’s zero-COVID policy is being tested as the country struggles to tame its worst virus outbreak yet. Frustration is rising over food shortages, people being locked down in their homes for weeks, and a policy of killing pet dogs suspected of being infected with COVID.
Click to expand...

Now, the economic effects are starting to show. Fuel demand in China is on track to drop 20% this month in the biggest decline since the first wave of COVID-19 lockdowns more than two years ago, sources told Bloomberg on Friday. And global supply chains are beginning to feel the crunch as well.
Click to expand...

Even if strict lockdowns in Shanghai are lifted, U.S. ports will likely be slammed with a wave of pent-up cargo from newly reopened factories in China. That will lead to higher freight rates, Jensen says, and worsen congestion at ports worldwide.
Click to expand... 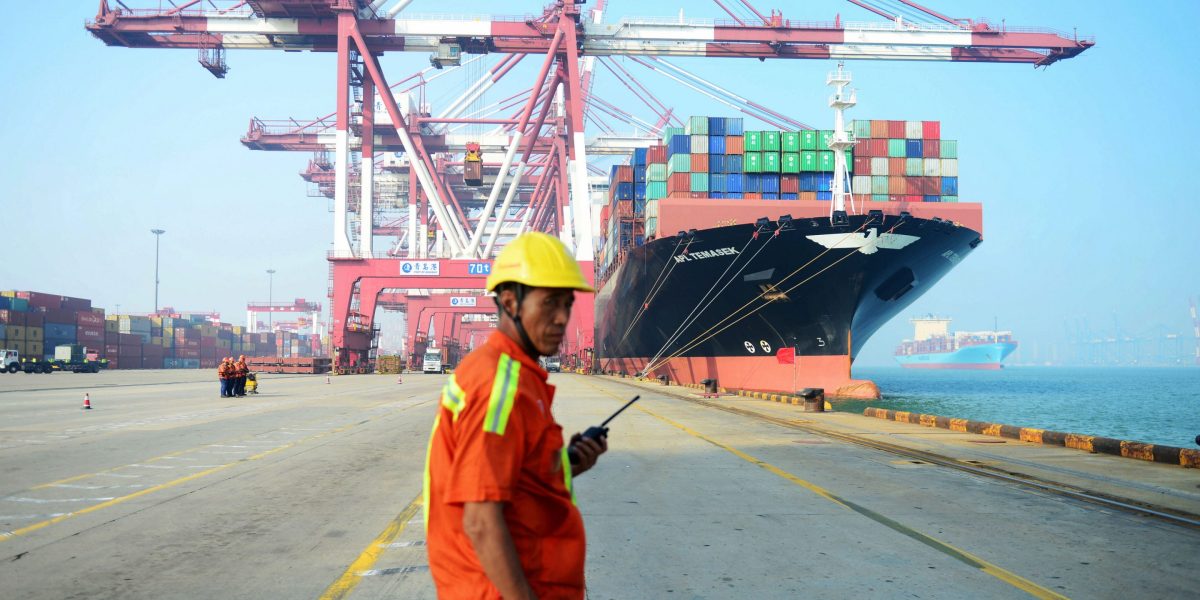 ‘Companies are beginning to panic’: Experts say China’s lockdowns will make inflation and the supply chain nightmare even worse

Experts say China's lockdowns will lead to a supply chain crunch on the west coast of the U.S. in the coming weeks, adding to four-decade high inflation.
fortune.com

Tesco is allowing three items per customer. Waitrose and Morrisons have limited shoppers to two items each. (Cooking oil)

Ukraine is a major exporter of sunflower oil. Many other exporters have suspended exports due to expected shortages also.
Click to expand...

A popular supermarket called Morrison’s has apologised to customers after suffering shortages of stocks on Saturday. This picture was taken at 2pm.

This is becoming a regular issue in the UK, with shortages of many common foods.

Can anyone in the UK confirm?
Click to expand...

https://twitter.com/i/web/status/1517958902264049664
Geopolitical analyst Alfredo Jalife said at a conference on lithium in Latin America that the Saudis no longer even answer Biden's phone calls and that the Saudis have reportedly canceled multiple meetings with Biden cabinet members.

This seems to be the case and a sign of the end of the petrodollar.

As the United States and its allies stand united against the Russian invasion of Ukraine, Saudi Arabia is siding with Russia. By failing to publicly condemn the invasion and reiterating its commitment to the OPEC+ agreement, the Saudi government exposed cracks in its long-standing partnership with the United States.
Click to expand...

By refusing to compensate for Russian oil, the crown prince is facilitating Putin’s aggression by allowing him to weaponize energy in the face of sanctions imposed by the international community and hold energy-dependent European countries hostage to Russian oil and gas.
Click to expand... 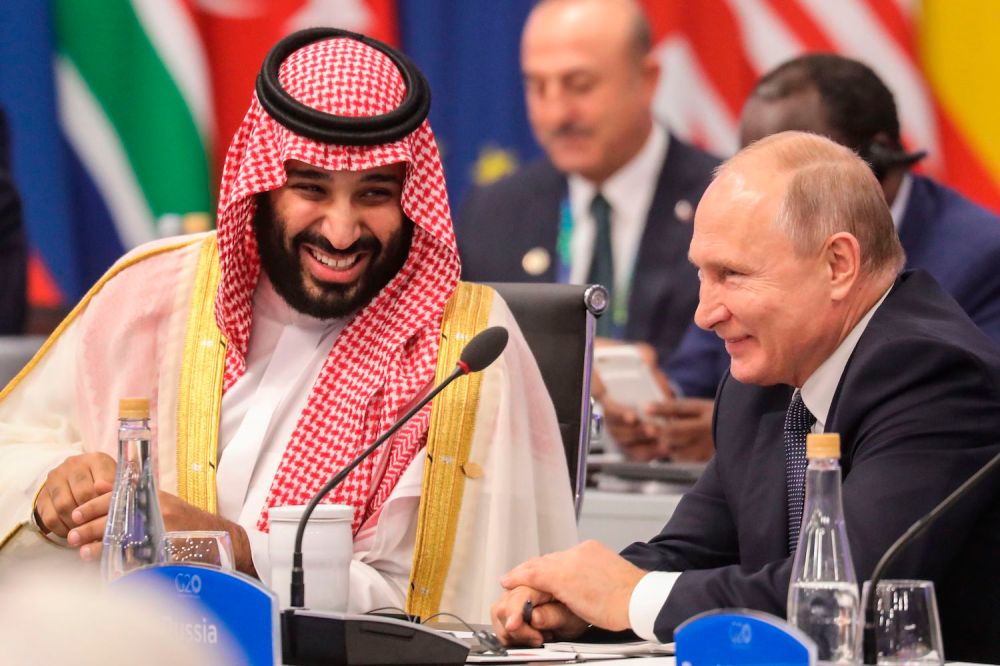 Riyadh could make a difference in oil markets but has chosen to side with fellow authoritarians rather than the United States.

loreta said:
Please, it is important to translate, and then everybody can understand.

He says something like: "We are both no native speakers and that he thinks too that it will be a Bad day for the Rockefellers and co.

He translatet it for me in a eqaly Bad german, like my english was.
It should be funny, and it was for me :D

I text my messages here, most of the time without translator, so sometimes there will be misstakes, but I think, this way I will lern the best

Claus said:
He says something like: "We are both no native speakers and that he thinks too that it will be a Bad day for the Rockefellers and co.

He translaret it for me in a eqaly Bad german, like my english was.
It should be funny, and it was for me :D

I Text my messages here, most of the time without translator, so sometimes there will be misstakes, but I think, this way I will lern the best

FOTCM Member
About food shortages, prices, weather, this man that most of you know, has a lot of information. I like him. He compares what is happening to the XV century. I don't know about the XV century but maybe the XIV? Like in the book by Barbara Tuchman? A distant mirror: the calamitous XIV century when there were war and famines? Many similar with what we are living and will live.

FOTCM Member
'The "killing" of dollar is in full swing.'


Russia urges allies to dump dollar and euro in trade​

Moscow has called on trading partners to switch to national currencies

Russia should increase settlements in national currencies with partner countries, Denis Manturov, head of the Russian Ministry of Industry and Trade, said at the plenary session of the Innoprom international exhibition in Uzbekistan on Monday.

He was addressing countries within the Eurasian Economic Union (EAEU), BRICS and the Shanghai Cooperation Organisation (SCO), of which Russia is a member.

According to the minister, in 2021, the growth of Russia’s trade turnover with partners within these associations amounted to about 38%, while together these unions make up roughly half of the global economy. According to Manturov, the future of their successful cooperation depends on how fast Russia’s partners move away from the US dollar and the euro toward national currencies in mutual settlements.

“What is happening today in the global economy and in the world gives us a hint about how we need to rebuild our logistics, industrial cooperation, in what directions we can develop our economies. This [is] de-dollarization, and now we have added de-euroization, that is, the transition to our own currencies in order to be as independent as possible in terms of mutual settlements,” Manturov said.

The minister added that Western Europe and the US are now experiencing hyperinflation, which “affects the development of industrial sectors and the economy as a whole.” And reorienting cooperation within alliances which do not include the EU and the US to national currencies will give Russia’s partners maximum independence in the development of joint projects, he added.
Click to expand...

Maybe it's related to what Putin had done (the gold-ruble), but we didn't see the shockwave yet

Neil said:
I agree with those who say it relates to the petrodollar and the unveiling of Putin's resource backed currency.
Click to expand...

The ruble keeps an upwards trend relative to the dollars. Today the ruble exchange rate is 1 for 0.0135 dollar. In this beginning of the intervention in Ukraine, which occurred on February 24th, it was only 1 to 0.0122. It mean the ruble value relative the dollar increased by 10%:

But, is it the ruble which gained value and/or the dollar that lost value? To answer this question we can to measure these currencies relative to commodities like gas or gold. And the picture is pretty clear:

And the best example of financial Judo has been displayed by Russia once again.

Russia would have been completely fine without the sanctions, but Washington went blackmailing and forcing its vassal states to sanction Russia (at their peril) and now Russia has a currency growing stronger and the US one that is growing weaker, I think that such is the plan of most nations, including Russia, and they probably would have hoped to have the trend be exactly what it is... but recent events have definitely accelerated the course.

And it's Judo because it was an attack that could only be remedied by the lifting of sanctions and tying Russia back to the dollar as much as possible, but the US won't... Just like Napoleon and Hitler back in their day, Hubris will turn their attempts to destroy Russia into their own beginning of the end I daresay.

FOTCM Member
Historical context: prior to 2014 the Ruble was trading at about 30:1 against the US dollar. So if the sanctions regime completely collapses, the Ruble could easily return to those levels, or better:

Year after year, you make us stay on the edge of our seats for 30 remarkable days. This year, it has been another wild ride—we can't complain. You always seem to deliver the punch line without much warning. Nobody could have predicted the sudden end of the petrodollar, sneaky April! It's incredible how fast a simple human signature turned the world upside down—geomagnetic reversals are amateurs!

Forgive us for our late response, we wanted to give you enough time to materialize the highly expected "April Drop Dead Date." As you know, when things fall to the ground, they don't make a sound unless somebody is there to listen. Some things did in fact "drop dead," but we didn't hear them. Next time, if a "Drop Dead Date" is in your calendar, please give us a signal so we can all appreciate the effort you put in surprising us!

"May" the force be with you,

Natus Videre said:
"May" the force be with you,
Click to expand...

Where I am at, I would usually welcome April as the one month where surely the sun would show up, and things would be warm... this year, I kept thinking that maybe April drop date also referred to the temperatures constantly dropping to nearly freezing in the Northern hemisphere.

April was really cold where I live.

That is it, the April droped dead

.
There you have it the April drop dead day is May first

Claus said:
That is it, the April droped dead

.
There you have it the April drop dead day is May first

lol yea, maybe we'll simply get so fed up one day that we'll simply drop April altogether and go from March to March 2: The revenge of the sleet, to May: the return of the daylight
1

Ina said:
Apparently, CERN was ‘restarted’ on 22/4/22. (mentioned in the DarkJournalist X-124 Deep State in the Hot Zone, Atlantis Rising show last night).
Wondering how it will affect the mix bag of energies.
Click to expand...

The activation of CERN in Melbourne has been linked to an earthquake and the shooting up the shrine of remembrance.

Researchers will use the particle accelerator test system to develop the technology and explore industrial and medical uses.