Corsican weather: Why was it so cold?

It will not have escaped to anybody, our island has known a rather cold episode last weekend. Besides the wind, rain and thunderstorms, the maximum temperatures took on a winter color. This caused a deep depression over Europe and a high pressure system over the near Atlantic.

Corsica was particularly affected on September 26th and 27th, its summits having whitened prematurely!
"In Bastia, the drop was impressive" underlines Patrick Rebillout, director of the Meteo France Center in Ajaccio, "We recorded the lowest maxi for a month of September since 1955: 15.7 degrees on September 27th against 16.6 on September 29th 1955. The other weather stations are not to be outdone: 16.6 degrees in Ventiseri while the previous record was 17.1 on September 19th 1977.
In Marignana, 15 degrees against 16.4 in 2010, 10.1 in Bastelica against 12.9 in 2016, 11 in Bocognano against the previous record was 12.5 in 2007, 12.2 in Castirla against 16 in 1996. And the examples can be multiplied".
Although temperatures have since gradually and slowly recovered, they are still 2 or 3 degrees below seasonal averages.
We will have to wait until the middle of next week to return to near-normal autumn values. Until then, the water will have time to flow under the ... clouds. Next weekend will be rather gloomy! 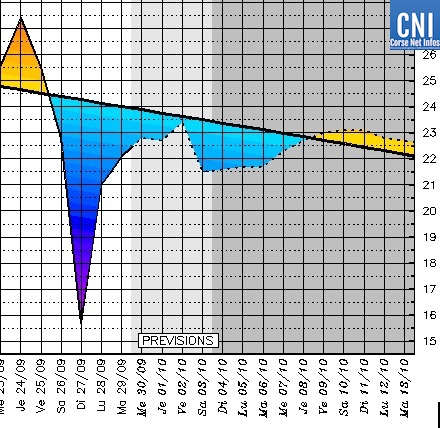 FOTCM Member
People are waking up. But still in denial.

A picture from February 2012. The Oude Waal, under the smoke of Nijmegen in the Ooijpolder. The sun is shining, it is freezing hard and the frost-covered trees by the water contrast sharply with the bright blue sky above. In the distance the white plume of smoke from the Power Plant is visible. Hundreds of people skate on the thick ice. From the dike it looks like a teeming anthill. The enthusiastic screams of children are not in the air. You can buy biscuits and sweets at two different tents.

It looks like a painting by a Dutch master, I hear someone say. And then he is talking about Hendrick Avercamp, the most famous of the painters of typical Dutch winter landscapes. Avercamp lived in the midst of what we now call the Little Ice Age. The Little Ice Age ran from roughly 1550 to about 1850, but the cooling to it had started earlier, some say as early as the 14th century. During the Little Ice Age, the average temperatures in our area were about 1 to 2 degrees lower than today. There were far more cold winters than now, often starting in November and sometimes ending only in April.
Beautiful body of work

Avercamp was born in Amsterdam in the winter of 1585, but soon moved to Kampen. He was deaf and dumb and specialized in drawing at a young age. As a lover of painting winter scenes, he was more than happy to have fun during the Little Ice Age. It was hit almost every year and with the help of the sketches he made during the winters, he was able to continue working on his winter landscapes during the summers. A beautiful oeuvre was created, which for winter lovers - especially now that winters usually skip in our time - is more than worth a look.

The background to the Little Ice Age is still being discussed. The cooling came after the medieval climate optimum, in which temperatures were comparable to even slightly higher than now. It was the time when the south of Greenland was colonized by the Vikings, where wine could be grown as far as the British Isles and when even peaches grew in Flanders.
What made the climate suddenly change?

From the 16th century, all of this was suddenly no longer possible. The exact causes of the cooling at that time are still a bit of a guess. According to one scientist, some explosive volcanic eruptions were behind the sudden changes in our climate, others are intrigued by the changes on the surface of the sun that were taking place at the time. For example, the low point of the Little Ice Age seemed to coincide with the period known today as the Maunder Minimum, when there were hardly any sunspots on the surface of the sun. The Maunderminimum started in 1645 and lasted until 1715.

A new study, conducted by scientists from Norway, Sweden, Denmark and the United States, adds a new one to the possible list of causes. From research in the vicinity of Iceland and Greenland, they have been able to reconstruct how the amount of sea ice, which was driven south from the Arctic Ocean through Fram Street on the east side of Greenland and ended up in the Northern Ocean, suddenly became very strong from roughly 1300. increased.

This made the seawater of the North Atlantic Ocean colder and sweeter. And it should have been this development that helped trigger the Little Ice Age, the researchers think. The period in which much more sea ice penetrated the North Atlantic Ocean than usual lasted until the end of the 14th century and then ended as abruptly as it had started. The climate change, which was (partly) the result, lasted longer and lasted until the middle of the 19th century.
External float not always necessary

According to the study authors, these events show that the climate doesn't always need an external driver to change suddenly. This is in line with research by the KNMI, among others, which shows that even in times of a warming climate, such as now, it can still be considerably colder for several decades. Various model simulations have already come up with such, reasonably inexplicable extremes.

However, the research now published also leaves many questions open. One of those questions is what exactly was the cause of that suddenly larger ice transport from the Arctic to the North Atlantic? Was that a change in the Arctic wind regime that pushed the sea ice south? Or was it simply that more ice was formed as temperatures dropped, which made it easier to escape? If the latter is true, it could again be a bit of a "Chicken and the Egg" story.

Very interesting articles, thanks Gary. Just saw this article on Electroverse, about the impact of the Grand Solar minumum in Spain:

Today, the impacts of the Grand Solar Minimum are seen in Spain.
Across the higher elevations of the Iberian Peninsula as much as half a meter (1.64 ft) of snow has accumulated — totals that would be at home after a powerful winter storm, not least one in late-Sept/early-Oct. And along with the early snow, the Cogulla weather station, located in Cerler (which sits at an elevation of 2,300m), also registered a teeth-chattering low of -5.9C (21F).
At the higher elevations the snow will now not go away, warns the guard of the Góriz refuge Joan María Vendrell: it is here to stay for the season.

This is how glaciers build.

This is also how ice ages begin.

The COLD TIMES are returning, the mid-latitudes are REFREEZING, in line with historically low solar activity, cloud-nucleating Cosmic Rays, and a meridional jet stream flow.
Click to expand...

Of late, both hemispheres have been suffering out-of-season cold and snow as polar conditions have invaded the mid-latitudes.

I see that snow has fallen in England and other places, but near St. Petersburg (Russia) all last week the weather was abnormally WARM (+ 17C + 19C) and it was warm at night, although at this time there should be night FROZES. Nothing of the kind, the trees are full of leaves, I have watermelons blooming in my greenhouse (in October!). I went outside in shorts during the day! Heat records were broken every day in the history of observations.
But I see that the weather in general has become very UNSTABLE and UNEXPECTED. Before that, at the beginning of September it was cold, on September 17 we even turned on the central heating (earlier than usual).
In addition, the spring was very cold, frosts literally until 30-31 MAY, there was no foliage on the trees at all until the beginning of JUNE! I saw trees blooming without leaves at all!
Summer was also very strange, after the cold the heat came + 30C, and then it got colder again and heavy rains and hail began. A lot of hail this summer. 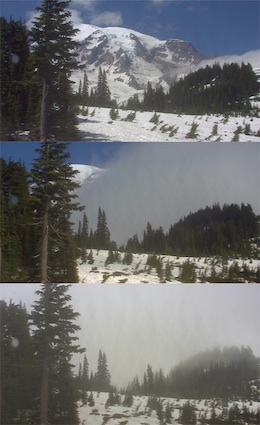 Ambassador
FOTCM Member
In the lower parts of the interior of BC the thermometer decided to announce its winter drop over the last few days. Snow has been building at higher elevations, and now steadily inching its way down slope. Frost this morning followed by light snow - cold winds. Tomorrow is to be colder, so stripped the greenhouse and covered some flowers with hope, which will likely not 'show' again. The little chart on my phone shows - 3 c in the am tomorrow, and by Sunday it comes in at lovely -13 c, with snow (great

). Halloween is weeks away, so will have to see if the weather become more entrenched or it eases off for a charitable late October and early November (there is more to do outside before the crunch of winter).

Seems just the other week it was wildfires and dry furnace heat; all forgotten now.


At least 20 centimeters of snow has fallen. What fell from the roof totally blocked us and we just can't go down - said Janusz, the owner of one of the guesthouses. He added that the snow is very wet. - There hasn't been so much snow for 10 years as I am here yet - he said.
Click to expand... 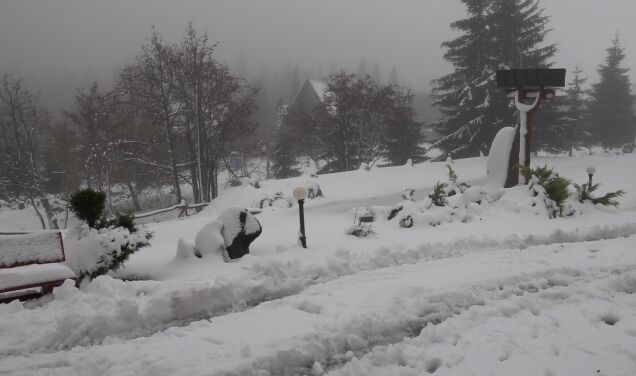 FOTCM Member
I've took this photo two days ago while flying from Frankfurt to Zagreb, over the Austrian Alps. Seems quite extensive snow cover for this time of year.

'Get your shovelling practice in': Southern Manitoba snow dump could be here to stay

Winnipeggers awoke Wednesday morning to snow blanketing rooftops and roads, and unseasonably cold weather means the white stuff might not be going away before spring.

"Unfortunately, with five or six centimetres and with our below-normal temperatures looking like it's going to continue at least until Halloween, it's probably a pretty good bet that the snow is going to stick around here," said Chris Stammers, a meteorologist with Environment Canada.

"Get your shovelling practice in."

Many Winnipeg roads and Manitoba highways were covered in ice and snow ahead of rush hour, the provincial highway conditions map said.

A crash closed Highway 1 at the Portage la Prairie bypass, between Highway 240 and Angle Road, but it reopened around 9:30 a.m. A semi-trailer truck was seen being pulled from a ditch in the area.

It's normal to get snow in October, but it often melts away. Stammers recalled that when Winnipeg got walloped with over 30 centimetres during a Thanksgiving weekend snowstorm last year, it disappeared before winter later set in.

With temperatures around 10 C below normal for this time of year, he isn't confident Winnipeg will be snow-free again in 2020.

"When the temperatures are that far below normal at this time of year, any snowfall is probably going to stick," he said. "That part of it is unprecedented, but the fact that we're getting snow in October is not really."

There is a chance of more snow on Thursday, Stammers said.

On October 20, a thunderstorm passed in Crete (Greece), accompanied by heavy rain and hail - snowdrifts appeared on the roads and streets.
The main blow of the elements fell on Heraklion, Chania and Malia - the inhabitants of these cities woke up in the middle of the night due to the noise of the rain. Greek media showed footage of the main highway on the island, covered in white snowdrifts from hail, and workers shoveling rainfall from the streets of the coastal town of Malia. 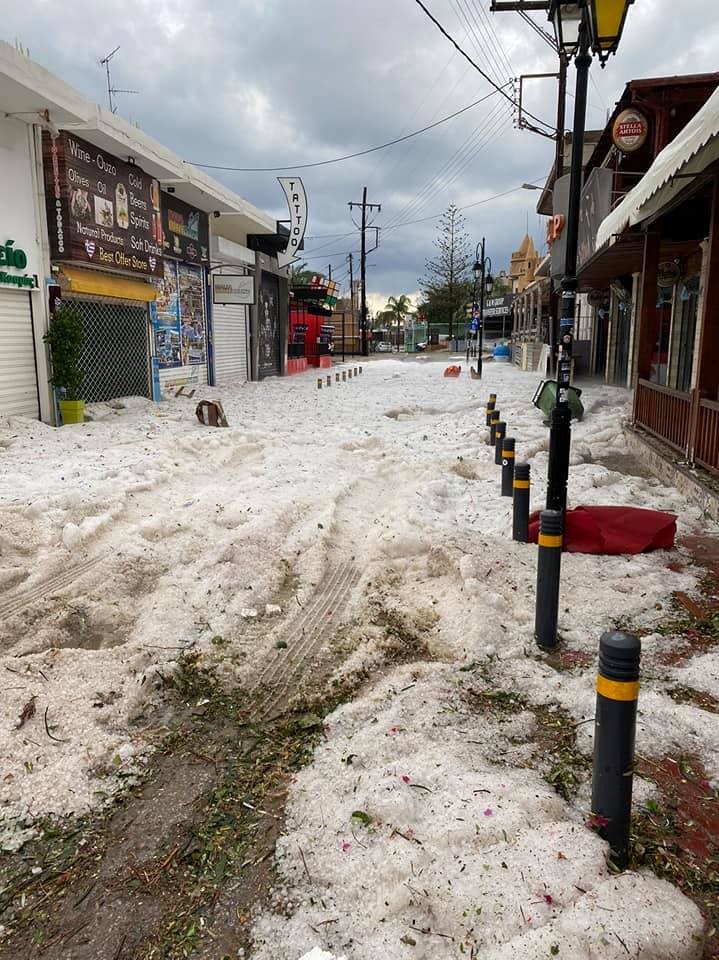 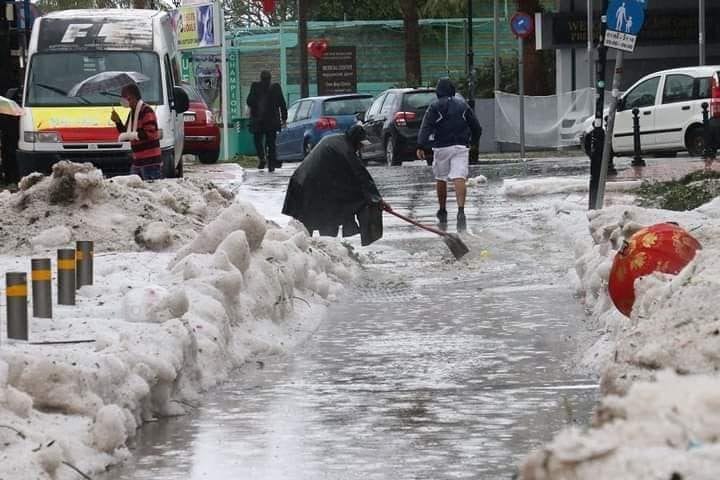 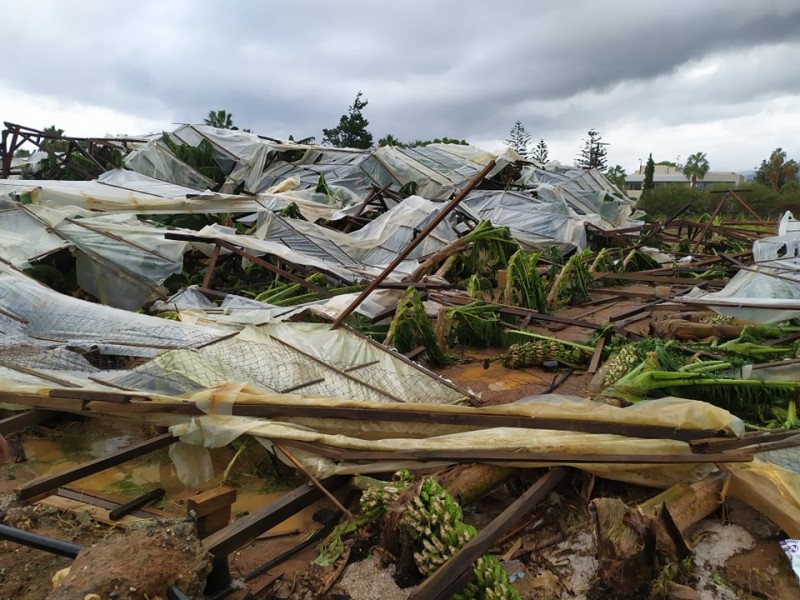