Wildfires around the world: Increasing in frequency and intensity?

FOTCM Member
A massive effort is underway with keeping the Caldor fire from the Lake Tahoe basin.

Fresh evacuation orders have been issued in the resort city of South Lake Tahoe, California, as a devastating wildfire closes in. Meanwhile, fires to the south of Los Angeles have whipped up intense tornadoes of flame.
Click to expand...

Some 24,000 people have already left their homes along the highway connecting South Lake Tahoe with Sacramento, CBS San Francisco reported on Monday. The fire has destroyed nearly 500 structures, injured five people, and burned more than 177,000 acres, according to data from Cal Fire.
Click to expand...

I look at this article and think about Deep State agents causing fires to drive people out of their homes and force them to accept that "You now live in a rented home and own nothing. You'll be happy!".
Also:
The journalist says that he thinks the rumor that BlackRock is buying up homes is fake-news, while he links to his earlier article, where he looks at the fact that when we look who in the world owns everything, all assets, all companies, BlackRock comes second.. Vanguard is first..
Last edited: Aug 30, 2021

FOTCM Member
Erratic wind patterns could be the game changer for the jewel of the sierras.

During this fly-through, Kurtis Ming shows the latest heat map depicting where the fires are burning, including in Kirkwood, and near neighborhoods in Meyers.
Click to expand... 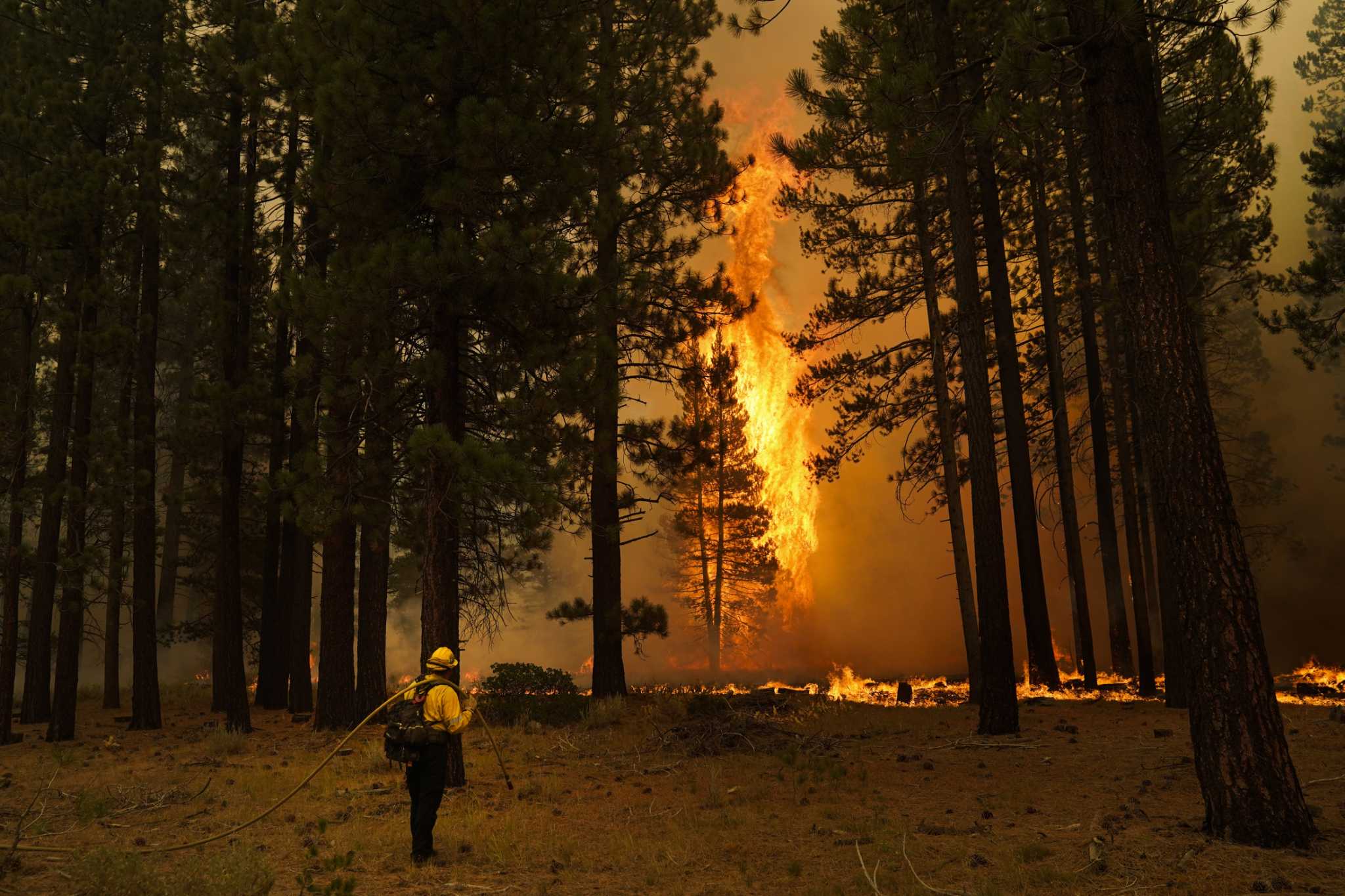 New evacuation orders were issued for parts of Douglas County on Tuesday afternoon. 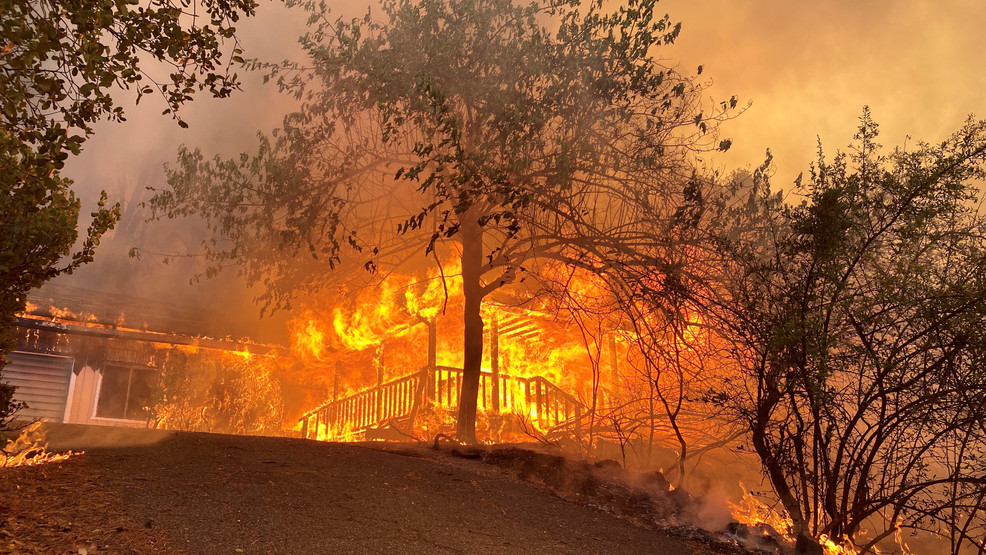 And of course started by climate change, err, no…more arson 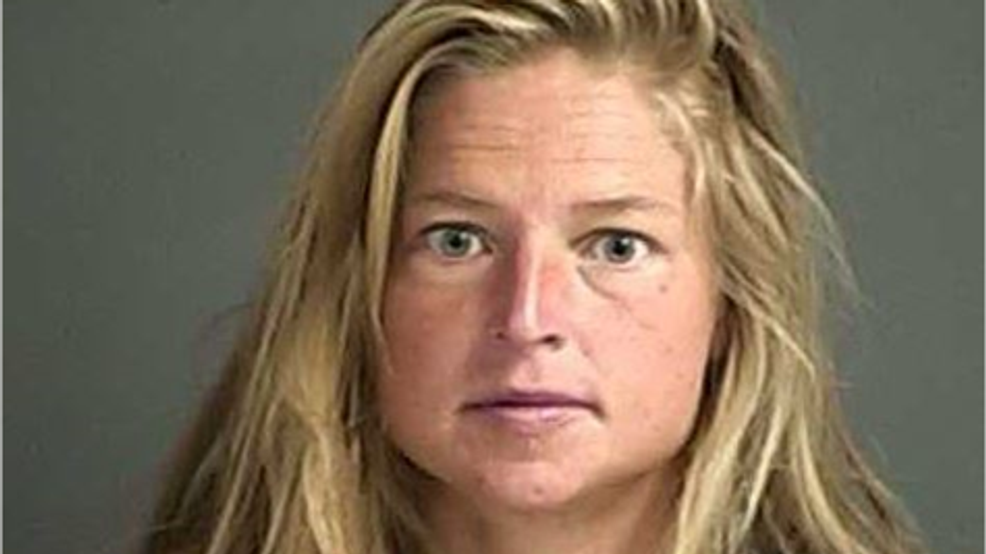 A Palo Alto woman has been arrested and charged with starting the Fawn Fire which continues to explode in size just north of Redding. 30-year-old Alexandra Souverneva is charged with arson to wildland. Fire investigators say that Souverneva walked out of the brush near the fire line and... 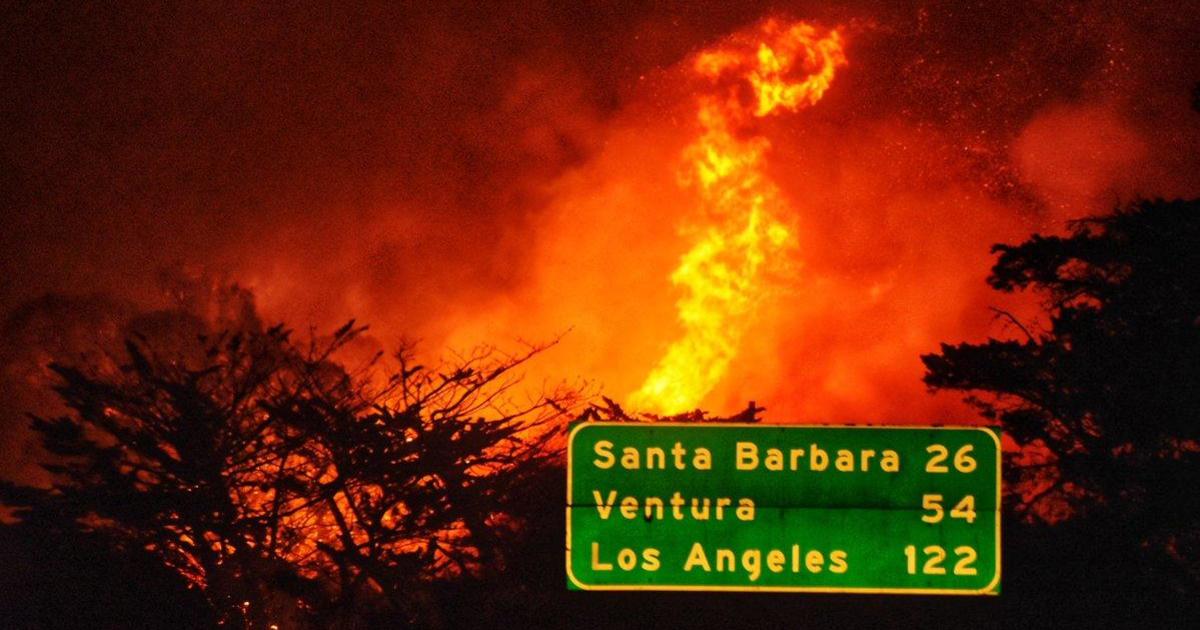 Alisal Fire in Southern California swells to 13,400 acres in one day with only 5% containment

The blaze closed portions of Highway 101, and many area residents were forced to evacuate.

The Alisal Fire nearly doubled in size throughout the day, with the flames spanning 13,500 acres as of Tuesday evening, according to CBS Los Angeles. There is no containment.
Click to expand... The Alisal Fire expanded to more than 13,400 acres Tuesday evening as firefighters continued attacking the blaze amidst windy, smoky conditions. The fire was 5% contained as of 7 p.m.

The Santa Barbara County Board of Supervisors declared a local state of emergency Tuesday afternoon in response to the fire. The board also asked that Gov. Gavin Newsom reinforce the county’s state of emergency.

The fire, which began Monday afternoon near Alisal Reservoir, established itself in Refugio Canyon on Tuesday and moved toward the burn scar of the 2016 Sherpa Fire, Santa Barbara City Fire Chief Chris Mailes told the City Council. He maintained there was no current threat to Santa Barbara.

Chief Mailes said Tuesday that the fire is starting to move down to the ocean area in several places and is starting to trek east, though it continues to burn through Refugio Canyon and to the west of the canyon.

Northwest winds of up to 40 mph pushed the fire southeast on Tuesday, according to Chief Mailes. The wind’s speed prohibited crews from utilizing fixed-wing aircraft, though helicopters delivered water drops over the flames.

Crews were hopeful that the winds would die down Tuesday evening.

The Office of Emergency Management extended an evacuation area to the area east of Calle Mariposa Reina, west of Arroyo Hondo, and south of West Camino Cielo at 3 p.m. Tuesday — 20 hours since the last change in evacuations.

Officials said Tuesday that about 100 to 150 structures remained threatened by the blaze, and one barn had been damaged.

The fire surrounded the Tajiguas Landfill Monday night, and the biofilter outside the Materials Recovery Facility flared up Tuesday. Public Works describes the biofilter as an “uncovered concrete structure filled with wood chips that receives and filters air from inside the maintenance recovery facility.”

The Alisal Fire also damaged the landfill’s drainage, landfill gas collection systems and heavy equipment. As part of a contingency plan, facilities in Ventura County will manage waste collected in the area on a short-term visit, according to a news release from the Public Works Department.

Andrew Madsen, the public affairs officer for Los Padres National Forest, told the News-Press on Tuesday that he’s encouraging people to keep an eye on fire activity in the coming days.

moke from the blaze was visible in downtown Santa Barbara on Tuesday, and fire officials reported low visibility in Refugio Canyon and near El Capitan State Beach.

The cause of the fire is still under investigation.

As a result of the smoke and ash from the fire, the Santa Barbara County Public Health Department issued an air quality watch Tuesday morning for the entire county, including the Channel Islands.

If residents see or smell smoke or are in an area with poor air quality, the health department recommends everyone:

— Head indoors and remain indoors, as much as possible.
— Avoid strenuous outdoor activity.

At left, inmate crews march past a burnt out overturned semi truck during the second day of the Alisal Fire. At right, Ventura and Santa Barbara County firefighters perform structure protection of a ranch off Highway 101.
— Close all windows and doors that lead outside to prevent bringing additional smoke inside.
— Avoid driving when possible and use “recycle” or re-circulate mode to avoid drawing smoky air into the car.
— Drink plenty of fluids to keep respiratory membranes moist.
— If you are an essential worker and must work outside during wildfire smoke conditions, the use of a properly fitted N-95 mask provides protection.

All county residents can check updated local air conditions by visiting ourair.org/todays-air-quality or fire.airnow.gov. As of Tuesday afternoon, the quality was moderate at the PM2.5 level, which means people with extreme sensitivities should consider reducing prolonged or heavy exertion.

Symptoms of exposure to smoke and soot include repeated coughing, shortness of breath or difficulty breathing, wheezing, chest tightness or pain, palpitations, and nausea or unusual fatigue or lightheadedness, according to the Santa Barbara County Public Health Department. Those who experience symptoms should contact their doctor immediately, recommends Public Health.
Click to expand... 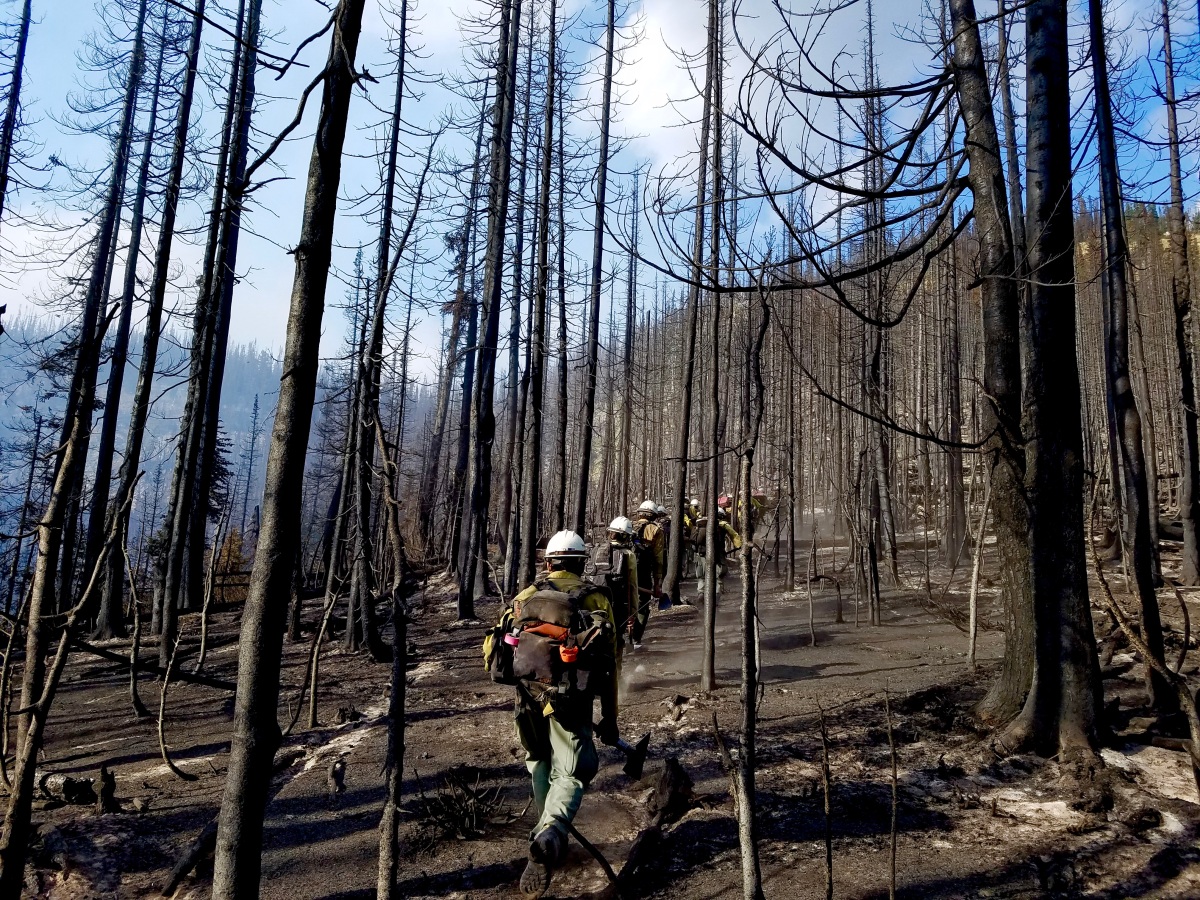 FOTCM Member
The scope and magnitude of the #CalfCanyonFire in New Mexico. This fire may, develop its own weather system in the coming days. 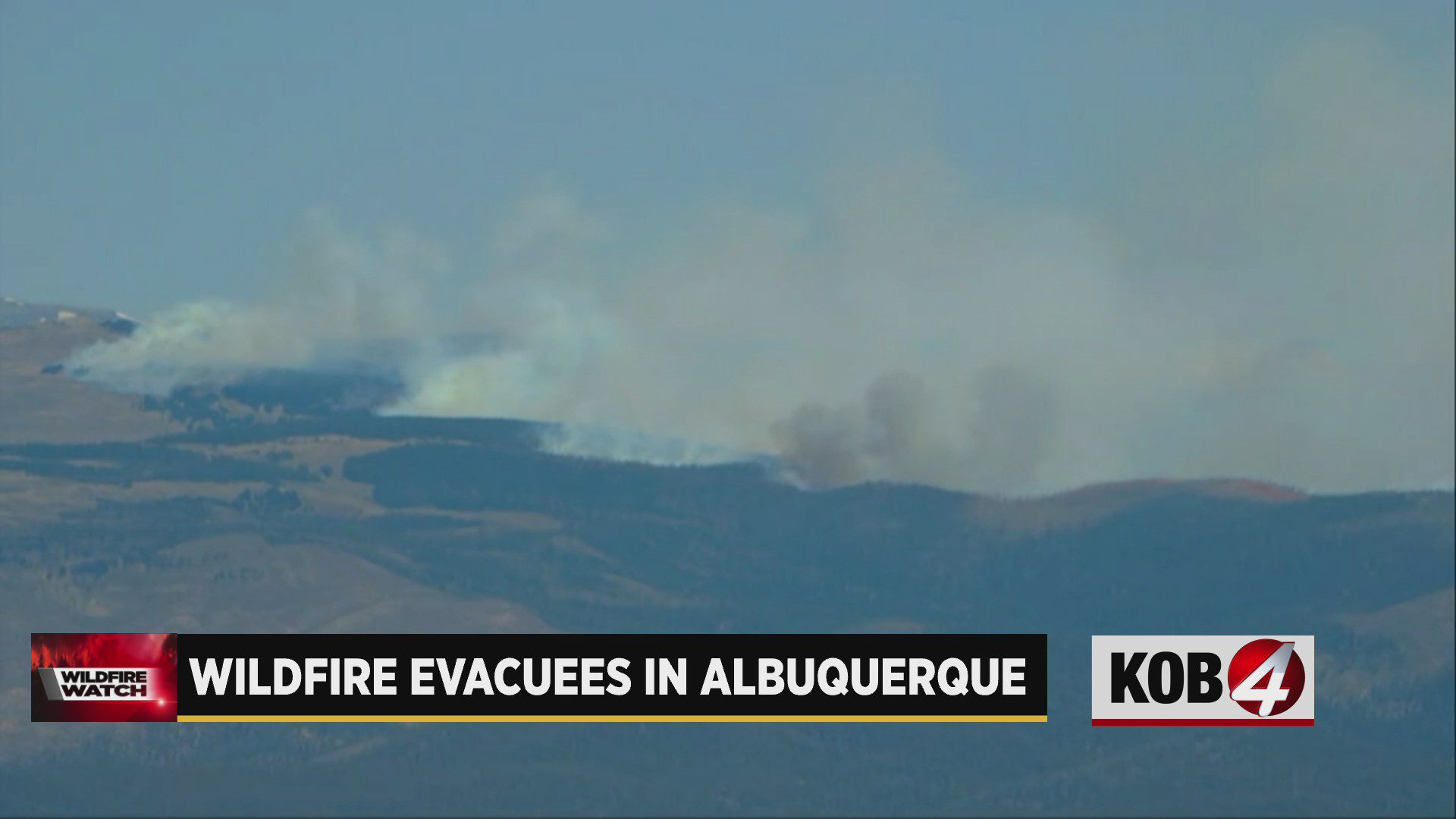 The City of Albuquerque is continuing its efforts to support neighboring communities impacted by the wildfires in northern New Mexico.

ALBUQUERQUE, N.M. — Thousands of people have had to leave their homes in northern New Mexico because of the massive Calf Canyon/Hermits Peak Fire. Many have had to go from hotel to hotel just to have a place to stay. Now, the City of Albuquerque is getting involved to make things a little easier.

City officials said there are about 1,500 evacuees in Albuquerque right now and close to half of them are staying in hotels – spending hundreds of dollars a day while dealing with the trauma of the fire.

While they don’t know when they can go back or what’s next for them, some relief is on the way. The City of Albuquerque announced that evacuees won’t have to pay a cent for their hotel rooms or food while they are in the city.

State Rep. Roger Montoya, D-Velarde, said he’s been in talks with the city and other organizations to help communities under evacuation orders. He’s heard from numerous families who are incredibly thankful for the help.

KOB 4 was also told that evacuees will be able to receive emotional services as well. This relief will stay in place for weeks and could be extended if needed.

There will also be a community hub set up Monday where evacuees can receive food boxes and other much-needed supplies. City officials said more information on the community hub will be posted online.

Those in need of lodging can access rooms as they become available by calling 505-244-8604.

Evacuees interested in receiving text alerts with information on resources and more can text ABQEVAC to 78015. Albuquerque residents interested in helping can find a list of donation needs here. Evacuees from impacted areas can get updated information by visiting cabq.gov/wildfires or calling 311 or 505-768-2000 for those calling from outside of the city.

The city continues to provide free access to the zoo, aquarium, botanical gardens and Balloon Museum for evacuees.
Click to expand... 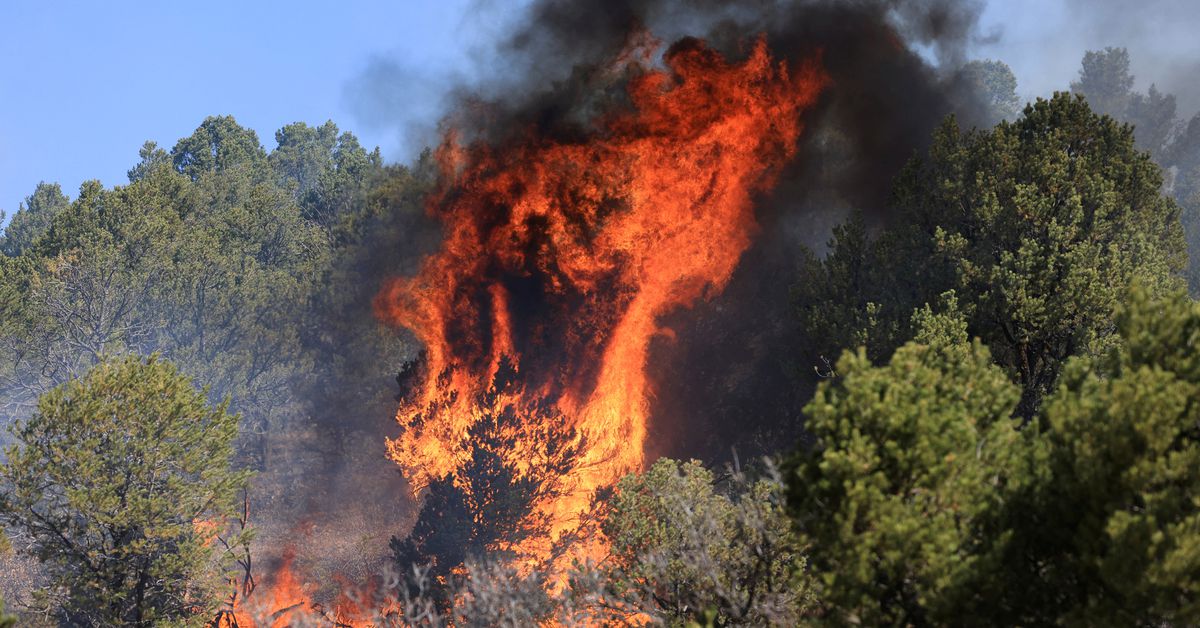 Two blazes that grew into New Mexico's largest ever wildfire were both started by the U.S. Forest Service (USFS), the agency said on Friday, prompting the state's governor to demand the federal government take full responsibility for the disaster.

The New Mexico fire was allegedly started by the Forest Service, by their own admission.


https://twitter.com/i/web/status/1547620728794521600
Permafrost is ablaze with hundreds of wildfires in the world’s coldest region
By The Siberian Times reporter13 July 2021 Snip:
Lena Pillars, a World Heritage Site, hit by the rampant flames, as calls grow for greater efforts to tackle infernos.

Wildfires on permafrost are ravaging Yakutia - or the Sakha Republic, the largest and coldest entity of the Russian Federation. The scale is mesmerising.

There are some separate 300 fires, now covering 12,140 square kilometres - but only around half of these are being tackled, because they pose a threat to people.

The rest are burning unchecked, with some of the world’s most remote wilderness destroyed by uncontrolled fires.

The savage summer fire season has seen major outbreaks around the Road of Bones, an arterial highway built by victims of repression in the Soviet era between Yakutsk - the regional capital and coldest city in the world - and the port of Magadan.
Click to expand...

https://twitter.com/i/web/status/1547828351947010048
[LIVE] #Incendies en #Gironde: according to the latest report from the prefecture published this morning, 3100 ha have burned in La Teste. 3 houses and 2 restaurants were destroyed in #Cazaux. The fire of #Landiras covered 4200 ha, and 480 people were evacuated last night… @LCI 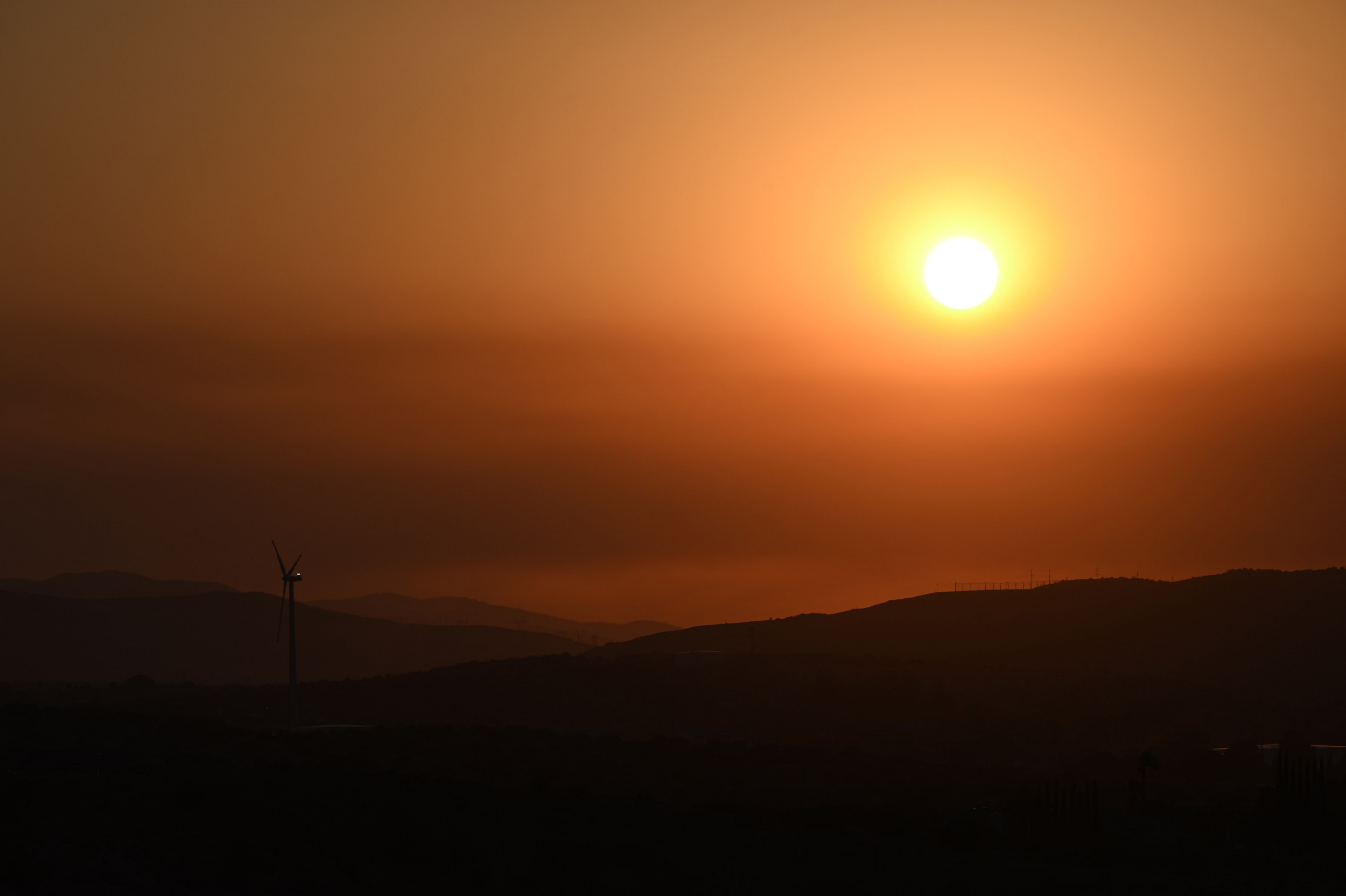 Dozens of wildfires are tearing through the U.S., with nearly 60 blazes detected across several Western states so far. Follow Newsweek's live blog for the latest updates.

FOTCM Member
Remember the two years ago blast of silos in Beirut port? 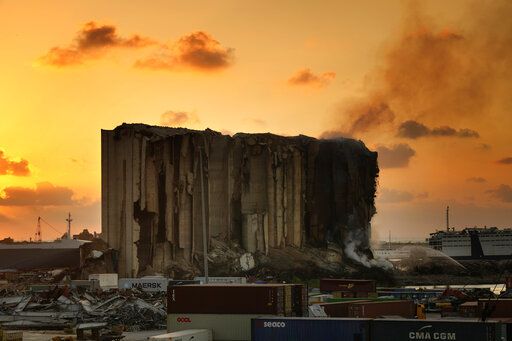 Firefighters extinguish a fire at the silos in the north block of the Beirut Port in Beirut, Lebanon, Thursday, July 21, 2022. The silos were destroyed by a massive explosion in 2020 and the structure might have caught on fire due to fermented grains.

Lebanon's prime minister on Friday warned that the ruin of a massive grain silo risks total collapse due to an ongoing fire that's expanding amid the summer heat at the Beirut port where a devastating blast two years ago tore through the Mediterranean city.

A fire in the structure has been smoldering for the past two weeks due to 800 tons of grain inside fermenting in the hot weather. The government said the fire expanded after flames reached nearby electrical cables.

The fire and the dramatic sight of the smoldering, partially blackened silo is reviving memories and in some cases trauma for survivors of the gigantic explosion that tore through the port two years ago. Experts say part of the structure is leaning and in danger of tipping over.

Prime Minister Najib Mikati, who oversees a caretaker government, ordered firefighters and civil defense volunteers to step back Friday for their safety. Civil Defense volunteer Youssef Mallah told The Associated Press that they are still at the port, but have been ordered to stay far from the silo.

The August 2020 blast was caused by hundreds of tons of ammonium nitrate, a highly explosive material used in fertilizers, that had been improperly stored for years at the port's warehouse.

The tall structure withstood the force, effectively shielding the western part of Beirut from the explosion that killed over 200 people, wounded more than 6,000 and badly damaged entire neighborhoods.
Click to expand...