What's the weather where you are?

Ambassador
FOTCM Member
One interesting observation about the weather in the last few days.
Sunday was a very hot day. Temperatures just above 30C. We were out in nature with some friends to catch a little sun and clean air.
It was a hot day and the AC in the car was not enough to cool the car. At 4 pm we came home.
3 hours later I and my wife went outside to visit a nearby friend. When we went outside a north wind was blowing. We stayed there for an hour in their backyard and it was freezing cold. My wife took a blanket, and after a while, my lower jaw started to shake like it is the middle of the winter. The temperature falls from over 30C to somewhere just above 10C. About 20C temperature drops in 3 hours in the middle of the summer.
It is not a common thing here, especially in July.
I never experienced such a temperature drop so quickly. So this is how a sudden ice age could come. What if this temperature drop happens in middle of the winter and temperature drops much more and never came back to "normal" again for a long time.

The garden is growing well, the seasons changed well within a "normal" range of time IME's, the winter was very mild here last year and if anything we're missing a bit of precipitation although the local water tables seem filled. I must need the exercise of carrying water and chopping wood. The sun made it's way to the northern most point on the horizon right on time and is now moving back south and the North star is still directly behind my North altar as viewed from the South. There are WAY less Japanese beetles and Chinese stink bugs this year but the lightning bugs have put on a beautiful show for several weeks now. I'm working on a fungal friend for those stink bugs.

Speaking from a stance of empirically derived experience, and my own flavors of perceptions, the BBM environmental control systems here in North West Pennsylvania are well within programmed "limits". Hopefully our overlords let me pick wild mushrooms the rest of the year but just in case I have a dozen gourmet and medicinal species already growing where I am overlord. Just practicing for graduation.

Sadly the godz still wont let me have a go with the lightning. (wisdom of course, they know what I'd probably do with it hahaha)

Keep your eye's open and your hearts too, there is so much left for us all to do.... I look forward to whatever it is that plays out in the upcoming scenes. There is no point in being fearful or irritated. Funny what happens when you don't watch TV or listen to the gloom and doom of mainstream "NEWS".

The robins are singing beautifully again this morning and I have to go to work.

The weather here is nice with a good mix of sun, rain. The sun seems to heat up quickly, so its good that the clouds interrupt the heating. It does feel warmer than usual, because even when it is cloudy, it is warm and comfortable. The rains are stronger, but not like you see in some places on the news. With the warm weather, and more rain, we had a small thunder storm - something that only happens after a warm spell. The warmest temp was about 81°F

And my cell phone is always only getting the weakest signal, sometimes it even drops. I thought it was because I changed phones, but if others are having the same issue, I mention this.

Yesterday and today it's been cold (by Aussie standards) top temps of 15*C, wind (yesterday was 40 km/hr) and rain, with rain easing today. It's been a cold winter here so far, with the odd day a few weeks back where it was 21*C. Still, there are plenty of tourists about (I live along the coast & it's school holidays here) and most the locals are damned ticked off about it...because corona. Sheesh!

Overcast skies with mild rains watering the plants and cool, weak winds in Hungary, West of Ukraine, ~90 miles west of the Ukrainian border. This was last weeks natural weather running its course with an innocent and peaceful demeanor.

Yesterday it was starting to get hot again. So I applied the new weather-modding method. Result is again the skies are mirroring my personality: sky gets frightening with dark-grey-bellied clouds, violent winds, with the usual threatening rumble of lightning.

I see two positive outcomes of my interventions:
1. Always brings some rain. So if the soil is dry, plants are always watered. No drought damage occurs ever.
2. WINDS + COOL FRESH AIR ARRIVING DURING SWELTERING HEAT!! During the heat of summer the still air [no winds] usually heats-up even more, air gets stagnant and suffocating. In such a sweltering heat with no clouds in sight, one just cannot help but "pray for any winds.. I wish there were just a little wind.." but usually there are no winds for days and it gets super hot! So my intervention always causes winds = movement in the air masses. I think not only horizontal air-mass movements, which would just push hot air around at ground-level, but also VERTICAL AIR-MASS MOVEMENTS ==> pulling down cold air from higher altitude and mixing it with the ground-level hot air using 'enlivened' winds. This causes amazing cool drafts, a refreshing relief of cool winds during a hot summer week.

However:
This is dancing on a two-edged, sharp knife. Because it is very easy to make a storm-prone weather that normally would just run its course relatively peacefully [no rain usually, "storm clouds" are always flying over us, skipping our city giving no rain] so that normal thing, me turning it into an aggressive storm, hailstorm with sheets of rain and lightning + hurricane causing COLLATERAL DAMAGE and FLOODING.
Last edited: Jul 21, 2020

After rain in the night, the day was around 30 degrees here in middle Dalmacija, Croatia.

We were at the beach till almost sun set and I took some pictures that look like sun halo.

FOTCM Member
Predictions of 40*C in parts of France over the next couple of days.
The winter snow pack never amounted to much this year, and now water restrictions are now being implemented for 45 departments.

All last week was cloudless and was going to be full-on very hot and dry - without a drop of rain - in Hungary, ~90 miles west of the Ukrainian border.

Of course the weather was artificially denied to become super hot every day. Simply by using the new method: which resulted in successful denial of sweltering heat all week by inviting cold air to stream down all week giving the city a nice respite. All the stagnant hot air was refreshed day-by-day with cool down-streams from higher altitude via lively winds. These were the humidity-free - rainless - conditions I was expecting. In this HeatWave dominated weather the sky appeared to be darker blue at times and because the sky environment was completely depleted of water there were almost no clouds generated.

As soon as I began using the new method (and continued freely experimenting with it without any fear of causing sheets of rain and flooding) medium-strength winds woke up and began blowing. Wind got livelier under the continued Clear Blue Sky ==> as the sun was shining Uninhibited -- this should have resulted in serious heating up and suffocating heat as naturally is what happens, BUT INSTEAD==> The air got cooler and cooler as the winds got cooler: I guess significant amounts of colder air from higher altitude must have began streaming down, since without the intervention the air at ground level was/promised to be hot and stuffy.

This week the humidity levels returned to normal. As I overstepped slightly by continued 'sorcery' after the dry week (with this new method) today dark-grey bellied clouds were generated - almost real-time in a couple of minutes after I began applying the new method - I could see grey clouds pulling together at the targeted spot creating a darker and darker grey 'thick shield' against the sun, which was shining aggressively promising a serious heating-up leading to a super-hot day. Today we had the first violent summer-rain and now its constantly raining. So last week all the plants got parched and now there is rain to quench their thirst.

DOWNSIDE:
Messing with the weather like this, caused too frequent weak-to-mild rains in the last two months. Since the normal summer weather is generally DRIER here, the fruits on the trees underwent speedy bloating and enhanced rot, mildew. Cherries for example got cracked + bloated from too frequent rain ==> probably me messing with the weather denying sweltering hot dry summer days.

- - -
Still the vegetable market is booming... so others appear having harvested lots of fruit crops. However we have probably lost the entire apricot crop as the tree refuses to bear any fruit.

FOTCM Member
Yesterday afternoon a strong storm with a torrential rain and hail to the size of walnuts hit Skopje. 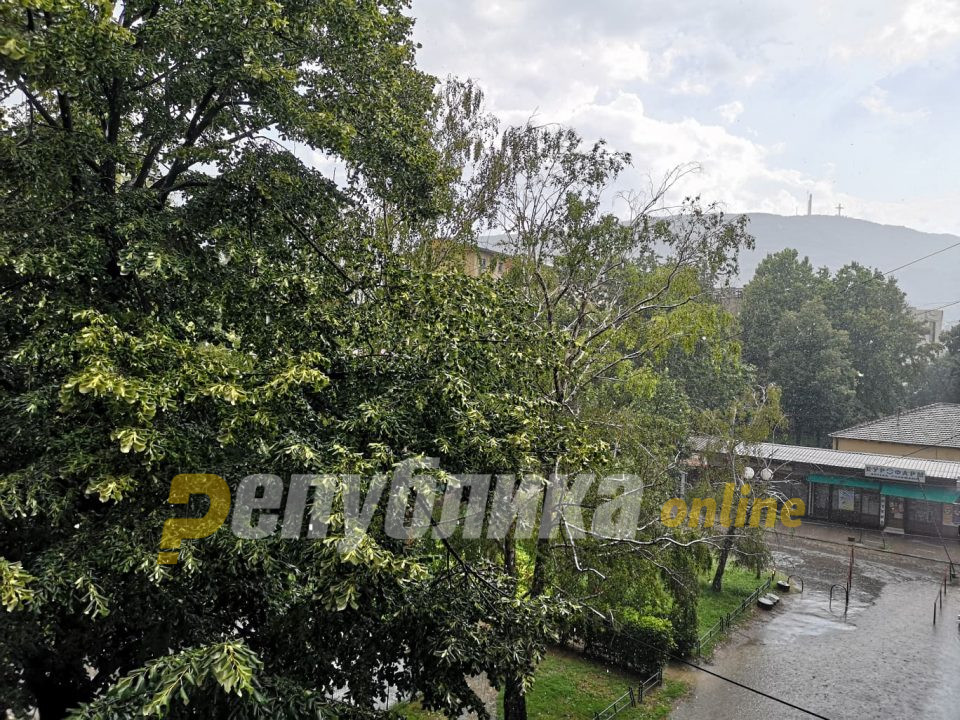 A strong summer storm hit parts of Skopje today, pouring rain and hail the size of walnuts. Streets overflowed with...

Ambassador
FOTCM Member
After a week with temperatures of 40C during the day in Macedonia, today we have again a huge temperature drop of only 14C, rain, and weather that looks like it is late autumn. Such a quick and dramatic change in a weather pattern and temperature.

FOTCM Member
Same here at very doable 31*C with cooler evening's. It did feel like an early Indian Summer.
The summer air was clean with clear blue skis with a refreshing sent of the forest, preparing for the coming fall.
A real triple A moment.

lots of summer storms here in NC. lots of lightening during these storms too. i definitely don't remember this many last year! and it is only the first week into august. temps have been normal for this time of year, nice and hot lol. always humid, especially from what seems to be daily showers/storms.

though i didn't feel this myself, an earthquake had occurred today in NC lol. nothing major but still VERY odd. pretty interesting times we are in, no doubt.

It's very hot here in central Texas (100's) and dry, but that's not unusual for this time of year. What I have found unusual this year is the lack of wildflowers. Even in very hot, dry weather, we always had multiple colors, abundant flowers. This year, only a few lonely sunflower types. And the trees are not their usual lush (yes, even when it's dry) green. They are more of a dull green with a brownish tint. The attached pictures are from LAST summer.


a line of intense, widespread, and fast-moving windstorms and sometimes thunderstorms that moves across a great distance and is characterized by damaging winds.


A derecho came through Iowa today producing 90-115 mph sustained winds for about a half an hour. Being in the Midwest I’ve always dealt with severe Thunderstorms and tornadoes, but I’ve never seen winds like that in this area. My street alone probably had a good 40-50 trees blown over.

Front of our house

Ambassador
FOTCM Member
We got the tail end of that storm today in southern lower Michigan @Charlie. A lot of wind when it blew in, probably 50-60 mph, but thankfully short lived. There was a tree across I69 expressway, didn't see any other reports of severe damage so far. We did get some much needed rain ☔️.
You must log in or register to reply here.
Share:
Facebook Twitter Reddit Pinterest Tumblr WhatsApp Email Share Link
Top Bottom