Volcanoes Erupting All Over

The following report states that satellites have detected that magma has been rising at Geldingadalir volcano on Fagradalsfjall mountain, and an eruption is believed to be due around 11th January. It says that they can't be sure where (or when) the eruption will happen and that new craters are likely to open up:

Magma on its way up the crust in Fagradalsfjall mountain, last measurements shows 1600 meters left (1,6km)​

According to a news on Vísir.is (linked below) the magma has started to rise in Fagradalsfjall mountain. At the time of the measurement from a satellite the magma had around 1600 meters (1,6km) left until it reached the surface. At the speed the magma was travelling, around 130 meters a day an eruption was expected to happen around 11-January-2022. This is the current estimate, but that might change of the magma increases or slows down the speed it is going up in the crust.

It is unclear what area is going to erupt since the new dyke is more alongside the older eruption dyke. There is more chance than less that new craters are going to open up and start erupting, some of the area is under fresh lava from earlier eruption. Making the area look interesting when this eruption starts.

Here is another impressive video taken from greater height, over the ongoing eruptions at the Hunga Tonga-Hunga Ha'apai volcano. It also appears that all vegetation is gone...

FOTCM Member
The Wolf volcano in the Galapagos Islands has erupted, spewing lava down its flanks and clouds of ash over the Pacific Ocean.

Administrator
Moderator
FOTCM Member
Just a note to say that I've moved posts about the major volcanic eruption in Tonga to its own thread. Information about earlier eruptions of this same volcano remain here. I guess, once news and discoveries related to the specific major eruption on January 15th 2022 dry up, posts about future activity at that volcano can return here to the general thread on volcanic activity.

The effusive activity at the volcano continues.
Click to expand...

Moderator
FOTCM Member
Putting this in the volcano section since it's most likely related; since December there's been the highest in number and strongest seismic swarm for over 30 years north of Lundarreykjadalur, Iceland:

Moderator
FOTCM Member
Here's a video comparing the power of many eruptions.

In view of this new activity, the CNE asks neighbors not to walk in areas and streams where volcanic material could fall.

Close to two dozen crew on board an Australian Navy ship heading to the Pacific nation of Tonga with vital medical and humanitarian supplies have been diagnosed with Covid-19, throwing the disaster relief mission into doubt. The Tongan crisis comes as unprecedented outbreaks begin to sweep across Pacific islands that were the last holdouts against the coronavirus, in a sign that the highly transmissible omicron variant is proving too strong for “Covid zero” policies that have protected populations for two years.
Photo via @TelGlobalHealth
Click to expand...

Tonga undersea volcano eruption released up to 18 megatons of energy​

By Mike Wall published about 16 hours ago Via Space.com
That's about 1,200 times more powerful than the atomic bomb the U.S. dropped on Hiroshima in 1945.
Scientists are starting to take the measure of the monster volcanic eruption that rocked the South Pacific kingdom of Tonga earlier this month.

The undersea volcano had been burbling since late December 2021, shaking the seas near Tonga with a series of outbursts. Things kicked into higher gear this month, with powerful blasts on Jan. 13 and Jan. 14 and then an even bigger eruption on Jan. 15 that sent ash and dust 25 miles (40 kilometers) into the Pacific sky.


Satellite photos showed the most recent eruption to be titanic, and researchers are now putting some numbers on it.

"This is a preliminary estimate, but we think the amount of energy released by the eruption was equivalent to somewhere between 4 to 18 megatons of TNT," Jim Garvin, chief scientist at NASA's Goddard Space Flight Center in Greenbelt, Maryland, said in a statement.

"That number is based on how much was removed, how resistant the rock was and how high the eruption cloud was blown into the atmosphere at a range of velocities," Garvin added.

For perspective: The 1980 eruption of Mount Saint Helens in Washington released about 24 megatons of TNT equivalent, and the famous 1883 explosion of Indonesia's Krakatau is estimated to have unleashed 200 megatons or so, NASA officials said in the same statement.

The atomic bomb that the United States dropped on the Japanese city of Hiroshima in July 1945 released the energy of roughly 15 kilotons of TNT. There are 1,000 kilotons in a megaton, so the high end of the Tonga volcano estimate is equivalent to about 1,200 Hiroshima bombs.

Garvin is part of a team of researchers who have been monitoring the Tonga volcano closely since 2015, when its activity pushed new land above the Pacific waves and joined two small pre-existing islands known as Hunga Tonga and Hunga Ha'apai.

"By early January, our data showed the island had expanded by about 60% compared to before the December activity started," Garvin said. "The whole island had been completely covered by a tenth of [a] cubic kilometer [0.02 cubic miles] of new ash. All of this was pretty normal, expected behavior, and very exciting to our team."

"Small volcanic islands, freshly made, evolving rapidly, are windows [into] the role of surface waters on Mars and how they may have affected similar small volcanic landforms," Garvin said. "We actually see fields of similar-looking features on Mars in several regions."
Click to expand...

David DuByne from ADAPT 2030 and Dennis DeLaurier from TheGSMPrepper talk about crop yield decline numbers from fertilizer and herbicide shortages, fast garden set up with grow bags and hay bail gardening. Communications readiness for power outages with exponential food price rises. How to prepare and protect yourselves and families.
Click to expand...

The tallest mountain in the Galapagos Islands has erupted, spewing lava down its flanks and clouds of ash over the Pacific Ocean, according to Ecuador's Geophysical Institute. The effusive eruption of the volcano continues. A cloud of gas and ash from Wolf Volcano rose to 3800 metres above sea level following the eruption that began shortly before midnight on Wednesday local time. After seven years of relative inactivity, the volcano back erupts. Lava flowing from the volcano has covered about 15 kilometres and is moving through the path of past eruptions.

The tallest mountain in the Galapagos Islands has erupted, spewing lava down its flanks and clouds of ash over the Pacific Ocean, according to Ecuador's Geophysical Institute. The effusive eruption of the volcano continues. A cloud of gas and ash from Wolf Volcano rose to 3800 metres above sea level following the eruption that began shortly before midnight on Wednesday local time. After seven years of relative inactivity, the volcano back erupts. Lava flowing from the volcano has covered about 15 kilometres and is moving through the path of past eruptions.

Fwiw, this seems be the event around the 7th of January rather than more recently, see: 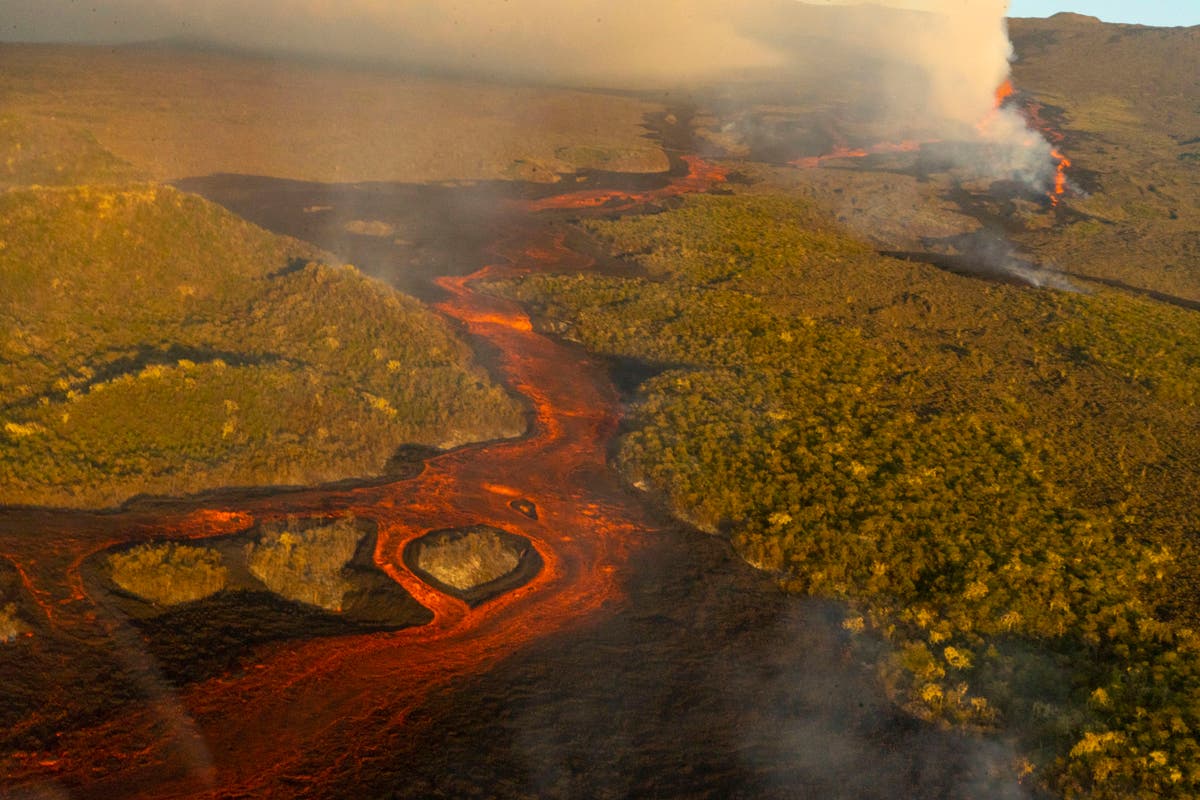 The tallest mountain in the Galapagos islands is erupting, spewing lava down its flanks and clouds of ash over the Pacific Ocean

treesparrow said:
Fwiw, this seems be the event around the 7th of January rather than more recently, see:

The tallest mountain in the Galapagos islands is erupting, spewing lava down its flanks and clouds of ash over the Pacific Ocean

Indeed, it appears that the volcanic activity at the Wolf Volcano on the Galapagos islands is winding down. The first mentioning of Wolf Volcano was back on 7 Jan 2022 at Vulkane.net (

Ecuador's Wolf volcano continues to erupt, but overshadowed by the Tonga Eruption reports. It is remarkable that two such large eruptions are occurring simultaneously on Pacific island volcanoes. However, both eruptions have different characteristics and are not coupled with each other. MIROVA again detected very high thermal radiation emanating from Wolf yesterday: it had a power of 6760 MW. Although the radiation is high, it halved compared to my last report last week. In a recent sentinel photo, you can see between the clouds that the lava flow has become much shorter and has retreated from the coastal area. Activity is limited to the area around the eruption fissure.

translated from German to English with DeepL
Click to expand...

FOTCM Member
Sakurajima volcano has erupted, spewing lava and clouds of ash over the Kyushu Island.

Ambassador
FOTCM Member
Thanks to this thread (and thank you for all these contributions!) I started following VolcanoDiscovery on Twitter. They published this today: 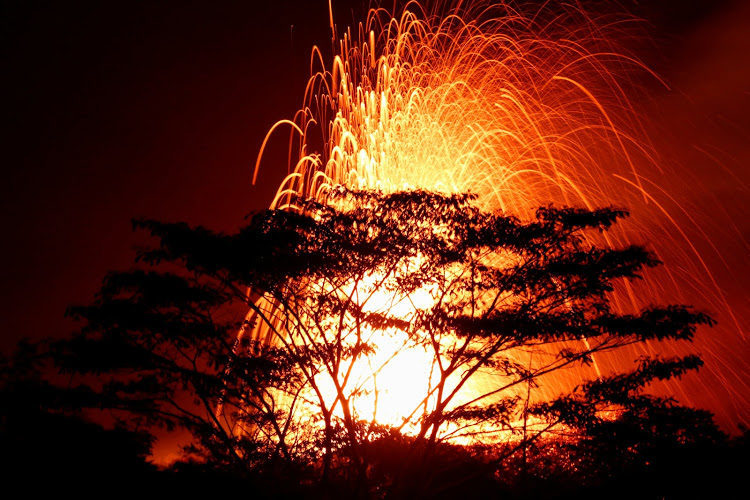 Heaven to Hell Timeline: Kilauea's Ruthless Eruption: 18,000+ Earthquakes and so Much More -- Sott.net

Kilauea, a volcano on the southern shore of the island of Hawaii, has been erupting almost continuously since 1983. On the 17th of May 17th, its eruption however was one of the strongest ever recorded, throwing ash 30,000 feet in the air. This...