Volcanoes Erupting All Over

According to news outlets 13 people have been killed in the pyroclastic clouds and following Lahar flows. The images below show an eerie scenery of the devastation.

What I do not understand:They say that the reason for the eruption has been caused by long and heavy rainfalls. How can that be?

I read something about

the moments before the eruption: In the public Facebook group "Volcanoes and Volcanism" - a Lavadome collapse occurred 20 minutes prior the main eruption at Semeru Volcano, and then generating a pyroclastic cloud during the eruption phase (My personal assumption however is, that the collapse must have something to do with the main eruption after all in order to trigger a hot pyroclastic cloud. I do not believe that a collapse alone is responsible for a (hot) pyroclastic cloud. You need pressure and heat for it to eject). After the eruption the heavy ash mixed with the rainfalls, creating lahar mud flows, destroying/burying everything in their way.

So, from what I understood, it wasn't the rainfalls themselves responsible for the eruption.

What rainwaters can do (other than creating mud flows, I mean) is, that when the water sinks down into the ground, interacting with warmer regions, triggering micro earthquakes. This was written only recently about the Campi Flegrei (Puzzuoli, Napoli, Italy) - where the rainwater takes 14 days to reach 2500 meter deep into the ground, interacting with the warmer/hotter regions there, leading up to increased micro earthquake activity.

Hardly any other volcano in the world is as well observed as the Caldera Campi Flegrei (Phlegraean Fields) near Pozzuoli in the greater Naples area. The Caldera volcano is suspected of being a "supervolcano" capable of producing explosive eruptions with a VEI 7. Yet the caldera of the volcano is populated: The city of Pozzuoli is practically inside the volcano and the metropolis of Naples borders directly on the eerie mountain of fire. But that's not all: the underground of the caldera rises and falls in a long-period pattern. At the moment, it is in an uplift phase: the ground has risen by up to 82 cm in places. The uplift has been taking place since 2011. The phenomenon is called bradyseismos. Scientists assume that magmatic fluids, in this case deep hydrothermal water, penetrate shallow layers of the earth and lift them. It is disputed whether at least part of the uplift is due to magma that collects under a stable layer of rock.

Earthquakes in the Campi Flegrei are partly caused by rainwater

The ground movements are often accompanied by swarm earthquakes, and it was suspected early on that at least part of the earthquakes are due to an interaction of rainwater with hydrothermal water. This fact was already recognised and hypothesised by the intuition of Abbot Giovanni Maria della Torre (1710-1782). The King of Naples, Ferdinand II of Bourbon, founded the Vesuvius Observatory in 1841 as a meteorological observatory to study the connection between meteorological and volcanic phenomena. But it was not until today that a study succeeded in statistically proving the influence of rain on the quake activity of the Campi Flegrei.

The study of the Neapolitan University Federico II was conducted under the leadership of Nicola Scafetta and Adriano Mazzarella and published in the journal "Water" in January.

The researchers compared the earthquake catalogue of seismic events from 2008 to 2020 with a statistical model derived from the daily precipitation measurements of the Meteorological Observatory of the University of Naples. The resulting model shows that swarm earthquakes occurred particularly frequently after extensive rainfall. The rainwater needs up to 14 days to penetrate to a depth of 2500 m and interact there with the over 100 degree hot deep water of the hydrothermal system. Micro-explosions are generated, which cause the quakes. Shocks up to a magnitude of 3 can occur.

But not all earthquakes in the Campi Flegrei are due to this mechanism.
So there is still room for speculation and further research.
Click to expand...

FOTCM Member
https://twitter.com/i/web/status/1467577729734385671
Today the appearance of large opening cracks in the main cone has been detected. #IGME_CSIC #EruptionLaPalma9

If i recall correctly there is another, pretty long vent that recently opened on La Palma - 500 meter west of the activity area, right in the middle among buildings.

Aviation Code Orange. Icelandmonitor writes that Code orange has been called out for the big gun volcano, Grimsvötn

This morning, the Icelandic Met Office updated the aviation color code for the Grímsvötn volcanic system, located under the ice cap of Vatnajökull glacier, from yellow to orange, mbl.is reports. The map is refreshed daily at 9 am.

The color codes, which are in accordance with recommended International Civil Aviation Organization procedures, are intended to inform the aviation sector about a volcano’s status.


According to vedur.is , the orange color code indicates the following:

“Volcano is exhibiting heightened unrest with increased likelihood of eruption.
or, Volcanic eruption is underway with no or minor ash emission.”

At present, Grímsvötn is the only volcano given an orange color code. Two volcanoes are marked with a yellow color code. Those are Askja, located north of Vatnajökull glacier, and Fagradalsfjall, Southwest Iceland, which has not shown any sign of volcanic activity since September 18. All the rest are marked green.

As we reported earlier today, a volcanic eruption in Grímsvötn has sometimes followed a glacial outburst flood, and although there were no signs of volcanic tremor this morning, scientists have stated the situation is being closely monitored and that it could change suddenly.
Click to expand...

If i recall correctly there is another, pretty long vent that recently opened on La Palma - 500 meter west of the activity area, right in the middle among buildings.
Click to expand...

https://twitter.com/i/web/status/1467799985890734083
To those of you in La Palma. Does anyone understand this?
@tvlapalma IGN says it's a volcanic tube, then Pevolca says it's a fissure... I don't understand anything...why don't they clarify this? A volcano erupted on the Indonesian island of Java on Saturday, reportedly obscuring the sun with a massive cloud of ash, and sending locals into a panic.

At least 22 people are dead and 20 more are still missing after Semeru volcano erupted on Indonesia's Java island.

At least 22 die after volcano eruption in Indonesia — local authorities

Five bodies have not yet been identified, a spokesman for the local emergencies agencies informed 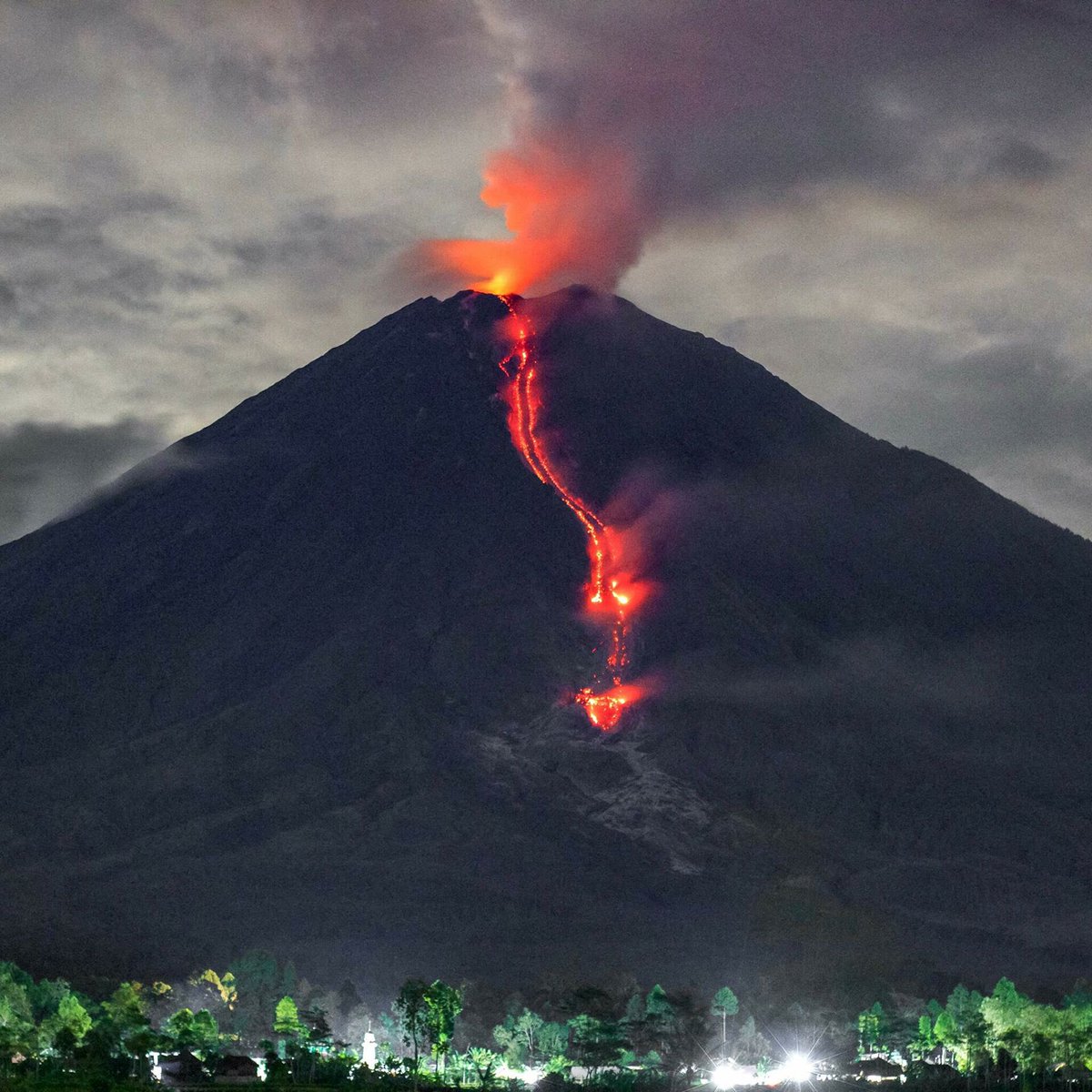 Aviation Code Orange. Icelandmonitor writes that Code orange has been called out for the big gun volcano, Grimsvötn
Click to expand...

Some footage from Twitter detailing the uptick in activity at volcano Grímsvötn and the glacial flooding (mentioned in your post above) that followed:

1st post: 'The last flyby of the ice cap at Vatnajökull shows that part of the ice sheet covering the volcano's craters Grímsvötn is collapsing. The volcanic danger traffic light has been raised to orange due to the recent earthquakes and collapses.'

2nd post: 'The boiler limits of Grímsvötn also show shear and collapse effects. After the water comes out, the volcanic system is losing pressure which may generate an eruption in the next few days, creating plumes of steam and ash.'


https://twitter.com/i/web/status/1467910640010420233
' The water that was under the glacier that covers the volcano Grímsvötn , began to come out. A Jökulhlaup began to be created that rose more than 4 m, it is a matter of days before we begin to see columns of steam and ash in the main crater.'

Could this be the cause of the seismic swarm off the Oregon coast?

300 miles off the coast of Oregon lies an active volcano that the world has never seen before, with a magma reservoir two thirds the length of Manhattan.

And this summer, a group of scientists from around the world spent 33 days on the Pacific Northwest ocean in a research vessel called Marcus G. Langseth, gathering images to create a 3D map of the behemoth and its magma chambers. The New York Times first reported the group's expedition and its findings.

Axial Seamount was first discovered in 1981 and has erupted three times since its discovery—in 1998, 2011 and 2015. But up until now, researchers have only been able to scan its surface in 2D cross-sections. That's because it lies deep underwater, at a depth of 4,626 feet below sea level.
Click to expand...

Puma1974 said:
Could this be the cause of the seismic swarm off the Oregon coast?

Scientists Are Studying a Massive Underwater Volcano off the Coast of Oregon
Click to expand...