FOTCM Member
Thank you for sharing yet another interesting session

FOTCM Member
Many thanks for this new session!

So with this pretty harmless vaccine Putin has made sure that there can hardly be any outside pressure for buying the poisoned and chipped vaccines that will be forced on the rest of the world. Great move!

There will be a 'second wave' but it will merely be a propaganda wave and there will be arbitrary lockdowns, but the real second wave will be one of layoffs and bankruptcies...

I was astounded how many adverse reactions wearing a mask can produce! Makes you feel sorry for all those 'nice folks' who think wearing masks is protecting other people. You might say that obedience could be causing bad health.

So vaccination and chipping will be the big challenge for the next months to come.

If the information field contains all possible information, is this the source that the Cs tap into, then?

Thanks for sharing. Things are getting more interesting by the day.

Thank you for the new session. I keep recalling the Cs saying “don’t despair, chaos precedes creation!” We will get through this madness...

FOTCM Member
Thanks for the new session Laura and Chateau Crew!

FOTCM Member
Thank you for the session Laura and team. It is sad to know that PTB will continue to screw the population into submission.

Thanks for the great session. It seems that the analysis of the crew are becoming more and more accurate and precise regarding geopolitical, social, and environmental issues. When reading the answers to the questions, most were right in line with the research done by SOTT.
Thanks for all the consistent work done over the years! All involved (even people putting in their time and effort here to work out “smaller” issues) are a great service to the world even if it doesn’t seem like it.
I’ve recently been thinking about where I would be without Laura, the C’s, Sott, and even the insights of many “random” contributors here. I would likely not be close to the person I am today, so thank you all.
I have a feeling that soon many more people will be ASKING for help and then it will be time for many of us to really shine.

Ageeva said:
I had a feeling Putin knew it was safe enough..to be willing have his daughter take it. Another great move on the chessboard! Of course no vaccine has been developed for Corona viruses precisely because of their mulitple mutations..but the Russian one comes without the Bill Gates 'bonuses' and naturally the Global PTB are furious, judging by the media backlash.
Click to expand...

At the beginning of the plandemic, seeing Putin downcast made me sad...i was waiting for a hit of him!

Wow, thanks for sharing another enlightening session. Sending you all my love.

(Ark)...Okay. Is there any kind of a fundamental physical law? Well, not physical... Some fundamental law of creation?

That in particular caught my attention, even though I think it has been stated before. I am wondering if other people besides me bristle whenever a character in a movie or book exclaims, “I had NO choice! blah blah blah...”. Granted, sometimes we are presented with bad and worse choices, but there is still a choice there (and even the choice not to make a choice). I dunno, just something I have thought about over time, pondering why I have such an aversion to hearing that phrase.

Ambassador
FOTCM Member
Thank you for the new session!


Tauriel said:
I wondered about the name 'Quinnilln' which reminds me of Quinine which brings up hydroxychloroquine.
Click to expand...

I was thinking exactly the same thing.

Laura said:
A: Facial recognition was never the full plan as it can be easily thwarted. It was used to accustom populace to tracking and surveillance. The ultimate surveillance is chipping. The fake pandemic justifies the vaccine with chip and wider tracking mandate. The mask is similar to antismoking. It induces obedience and allows identification of dissidence. Masks have the additional advantage of inducing brain damage and lowering of intelligence and general health.
Click to expand...

Yeah, it’s interesting how the narrative has changed from the 1st wave, which focused mainly on case fatality rates, and ‘flattening the curve, stay at home’, to focusing purely on case numbers and masks. Rising case numbers make the mortality rates even lower, but you won’t hear that in the MSM. They’ve been testing obedience. Wearing a mask symbolises acquiescing to all this madness, but they’re very clever in forcing people to do so (using the weight weight of the law and shaming those who don’t), so it appears that there’s no choice. Forced compulsion.

I am hoping that their wishful thinking of total surveillance/control of the population through vaccines will backfire on them royally (but that may be my wishful thinking!). In the mean time, I will be contacting some antivax organisations here to see what information I can get, when they try and impose this BS. Knowledge protects.

FOTCM Member
Thank you for a new session.


Laura said:
(Ark) So the first question is about the idea of multiverse. There is such a thing that is called multiverse. It's supposed to be like a soup that is boiling, and that produces bubbles. These bubbles are universes. Some bubbles are small and they die very soon, and some bubbles are big and have enough energy and organization like our universe. We are one of the big bubbles. Is it an approximately correct idea?

A: Based on Darwinism.

(Ark) This eliminates a number of planned questions. [laughter] Alright... Like a year ago...

A: Consciousness and information are foundational. There is no place for either in "boiling" and random emergence.

Q: (Ark) Yeah, alright. Now I want to ask: A year or two ago there was a Nobel Prize given for the detection of a gravitational wave. Since then, most of the people accept it, but there are some dissidents that call it a big fraud...

Q: (Ark) Oh, okay. Now, one of the guys who called it a big fraud is my old kind of friend by the name of Dimi Chakalov.

(Ark) We were discussing things years ago. Now, he is of course he doesn't spare words, calling it a fraud and blah blah blah. He gives arguments. But on the other hand, recently I downloaded a bunch of his recent papers. He is working on his idea of a platonic world. His platonic world is where all these ideas are being formed. Should I really study his ideas because he's onto something? Can I gain something from studying his crazy papers?

A: Briefly and selectively.

Q: (Ark) That was about Dimi. Last question: I would like to know if there is some most important law that governs all of the creation. We know conservation of energy is an important law. You can think about conservation of information. Maybe there is such a law? This John Archibald Wheeler who we quoted several times, he added his own law which is kind of timeless which says that it's pure geometric boundary which says boundary is zero. Another possible law is: As above, so below. Okay. Is there any kind of a fundamental physical law? Well, not physical... Some fundamental law of creation? 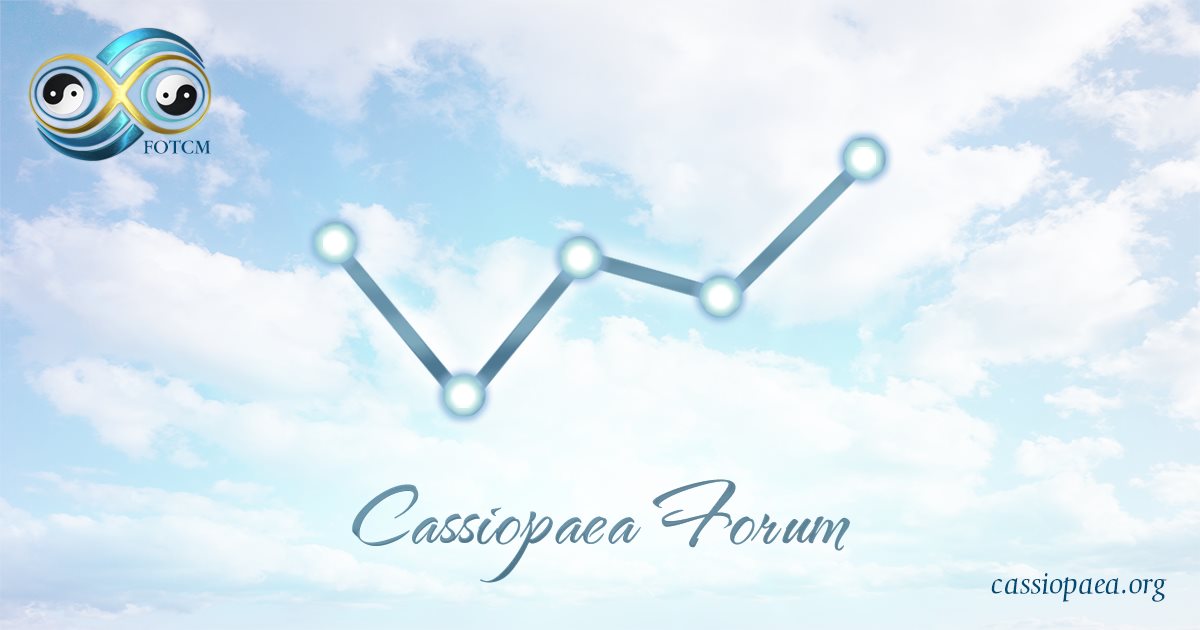 A model of spacetime where points are represented by nodes on a graph, connected by links that can be on or off, indicating whether the two points are directly connected as if next to each other in spacetime.
Click to expand...

"As we live, we seem to move through a succession of Nows," says Barbour, "and the question is, what are they?" For Barbour each Now is an arrangement of everything in the universe. "We have the strong impression that things have definite positions relative to each other. I aim to abstract away everything we cannot see (directly or indirectly) and simply keep this idea of many different things coexisting at once. There are simply the Nows, nothing more, nothing less."[...] Instead all the different possible configurations of the universe, every possible location of every atom throughout all of creation, exist simultaneously. Barbour's Nows all exist at once in a vast Platonic realm that stands completely and absolutely without time.

thanks for the section ... I must have bought a few dirty bitcoins when they cost just 1 dollar ... maybe they will come like pearls in the future.
Regarding the second wave ... they could not resist making us even poorer and more miserable, eh? Maybe they continue with the tune that the Russian vaccine is not safe ... or they will continue to inflate the deaths and argue in this way their deficiency ,although perhaps they have thought in addition to making us more miserable and obedient, to make time for our friend Gates' vaccine to be ready.

Moderator
FOTCM Member
The question/answer about the Russian vaccine is very interesting. For months, the bought media has been pushing he narrative that a vaccine was an urgent matter, that it's the only 100% safe thing in the universe, and that the sooner we have one the better. As soon as the Russian vaccine was announced, the narrative changed and now vaccines are not safe and they need testing and blah blah. It looks like Sputnik took them by surprise.

mkrnhr said:
The question/answer about the Russian vaccine is very interesting. For months, the bought media has been pushing he narrative that a vaccine was an urgent matter, that it's the only 100% safe thing in the universe, and that the sooner we have one the better. As soon as the Russian vaccine was announced, the narrative changed and now vaccines are not safe and they need testing and blah blah. It looks like Sputnik took them by surprise.
Click to expand...

It would have been even more assertive and acceptable to ask Russia for more data (which has already been willing to cooperate), after all it is assumed that we were all on the brink of death and the sooner the vaccine to get us out of this misery the better, but From that to going directly to discrediting it and not saying anything else is laughable ... by the way, Russia has predicted to start mass vaccination in a month, so they have time to create a second wave.

Thanks Laura and crew for the session! I hope this 2nd forced wave of COVID wakes more people up but that is wishful thinking on my part. Rather sad to see so many blindly believe main stream media.
You must log in or register to reply here.
Share:
Facebook Twitter Reddit Pinterest Tumblr WhatsApp Email Share Link
Top Bottom