Ambassador
FOTCM Member
Thanks for the show guys, and you hit a number of subjects, including how to measure human beings with a 2 meter

Over in Canada, many members, mostly from Galicia region of the Ukraine, have been making demands such as these:

Of course, these demands are being made to PM Freeland (Oops) Justin Trudeau, who does not seem to be saying very much at all in headlines, although Maclean's had a recent piece Will Canada help save Ukraine?

When President Joe Biden got off a video call with his Russian counterpart on Tuesday, he started working the phones: Paris, Berlin, Rome, and London were all on his call sheet. He was building a unified front of countries looking to send a strong signal to Russia that an incursion into Ukraine would come with dire consequences.

Ottawa was conspicuously not on his list.
[...]
Ottawa’s attention seems to be elsewhere, even when the conversations are happening in its own living room.
Click to expand...

Freeland's (Oops - darn keyboard) Ottawa's attention probably is on Ukraine (UNIFER for sure), however they are simply too busy locking down their own citizens due to their vaccination status, or just for their status of being simply Canadian (hard to tell).

Concerning the tornado at Mayfield, KY, oh my. That is a devastating event for people to have suffered through, with so many injured and lost loved ones.

The Doppler Radar image of uplifted debris, tells quite the story:

Latest episode: "This video contains content from FA Premier League, who has blocked it on copyright grounds"
(I wonder if that's the real reason it was censored)

Can you upload it anywhere else? Like Bitchute or Rumble plz

Rhythmik said:
Latest episode: "This video contains content from FA Premier League, who has blocked it on copyright grounds"
(I wonder if that's the real reason it was censored)

I also went back today to check the video and saw the censorship. I caught the show live, but usually it is uploaded somewhere else (Rumble) so access shouldn't be a problem.

Jefferson said:
View attachment 52455
I also went back today to check the video and saw the censorship. I caught the show live, but usually it is uploaded somewhere else (Rumble) so access shouldn't be a problem.
Click to expand...

Where did you see this notice?

It's still up and playing on YT.

Niall said:
It's still up and playing on YT.
Click to expand...

I got the same notification when accesing this link.

FOTCM Member
I don´t see it on YT as well:

Plus this is how I see it on the forum:

Maybe itis web washed in Germany and some other places....

Keit said:
I got the same notification when accesing this link.
Click to expand...

Administrator
Moderator
FOTCM Member
I see. We'll appeal it, and in the meantime it'll be up on Rumble/Odysee shortly.

FOTCM Member
Wasn't that video with football player with chest pain played from Twitter or something?

Shame it was taken down a fine show and thank you guys been watching a few weeks now and I'm always impressed.
Looks like going to Rumble/Odysse as a more reliable place to see the Videos.

aimarok said:
Wasn't that video with football player with chest pain played from Twitter or something?
Click to expand...

Anyway, the latest show is now up on Rumble and Odysee, linked here: NewsReal: COVID And Mind Control - Do People Fear The Virus, Or Their Government? -- Sott.net

The show is still on our YT channel, and will supposedly become 'unblocked' and 'visible' again once the 'trim' I did to remove the offending clip is 'processed'. So much fuss over nothing!

Administrator
Moderator
FOTCM Member
This is the book I referred to at the beginning of the show:

Chaos: Charles Manson, the CIA, and the Secret History of the Sixties ​

Brilliant book. It's been mentioned on the forum before, and we published a review about it on Sott when it came out in 2018 or so, but it deserves its own thread. It's similar to Dave McGowan's Laurel Canyon series, only written by someone more serious and conscientious about his research.

FOTCM Member
Will there be a show today?

Jefferson said:
Will there be a show today?

FOTCM Member
In reference to fertilizer, food shortages, and mass migration, I found this J. R. Nyquist interview with David DuByne of adapt2030 pretty interesting. Its 1.5 hours long and not in adapt2030 format just David being asked a wide range of questions.

Fertilizer being cut off amidst 20 percent crop loss already. (The ladder is being pulled up)

According to David (historically) 1 billion people would now be migrating, but they are locked down.

The magnetosphere is not holding the jet streams in place as it used to so, wonky weather from here on out.

He believes the smash and grab, store looting is to make acceptable the military in the stores, especially food stores and begin rationing. It won't be funny anymore if they start emptying grocery stores.

A short, and pretty good explanation of the electric universe theory.

He goes over Carolina bays and 12,000 years ago impact. (In ref. to sudden changes)

Russia has 11 monster ice brakers. 6 of them nuclear powered. Near double the power used on a US aircraft carrier. Some of them are “cargo ship” ice breakers. David believes they also can be used as mobile power plants.

David shares his idea that this ice age/starvation/destruction scenario is going to happen soon, and faster than anyone knows, and all this “stuff” we are experiencing is TPTB trying to clear the decks before it gets out of control. At one point he muses that maybe they are trying to save as many as the can. I think that giving them a little too much credit, but whatever. 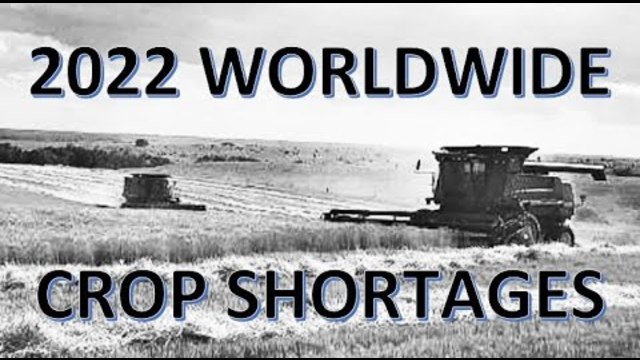 ➡️ My Patriot Supply Three Month Emergency Food Kit ➡️ http://www.foodwithadapt2030.com JR Nyquist's website is JRnyquist.blog and everything there is worth reading. Nyquist is a researcher studies Russia and China writing about their geopolitic…