METEOR OUTBURST POSSIBLE NEXT WEEK: In late 1995, Comet 73P/Schwassmann-Wachmann 3 exploded. Next week, some of the debris might hit Earth.
Click to expand...

Multiple forecasters agree that a meteor shower could erupt on May 31, 2022, when Earth runs into one or more debris streams from Comet 73P. The display could be as intense as a meteor storm (1000 or more meteors per hour) or as weak as nothing at all. No one knows how much debris is inside the approaching streams, so meteor rates are hard to estimate.
Click to expand...

Whatever happens, people in North America are in a good position to see it. Almost the entire continent will be in Moon-free darkness when the shower peaks. Maximum activity is expected around 1:00 am Eastern Daylight Time (05:00 UT) on Tuesday morning, May 31st. The shower's radiant (the point from which all meteors stream) will be almost straight above Baja California.
Click to expand...

This isn't the first time Earth has sampled debris from Comet 73P. In 1930, at least a handful of meteors were observed shortly after the comet's discovery by German astronomers. The meteors emerged from a radiant near 4th magnitude star tau Herculis, so the shower has since been called "the tau Herculid meteor shower." NASA cameras also detected minor tau Herculid activity in 2011 and 2017.
Click to expand...

One of the surprising discoveries made by the French Concordia project (Michel Maurette/Cecile Engrand/Jean Duprat) in Antarctica in the year 2000, was porphyritic olivine (PO) micrometeorites with an abundance of iron sulfide. These rare, “barely melted” cosmic spherules have not been heated sufficiently during atmospheric entry to complete an elemental differentiation, where the iron accumulates as a dense core and the volatiles evaporate.

On the contrary, these barely melted micrometeorites are closer to how the cosmic dust particles exist in outer space, with chunks and small microspherules of iron sulfide, nickel and iron together with the magnesium silicates.

When I first started to find the same barely melted type in urban dust, I was so surprised by the unusual visual appearance that the particles were put aside. Unlike other types of micrometeorites, which I could identify visually, these particles required chemical analysis to confirm their extraterrestrial origin.

A beautiful example of this barely melted type of micrometeorite is NMM 1833, which was found on the roof of an industrial building in Vestby, outside my hometown of Oslo. NMM 1833 measures about 0.3 mm and has iron sulfide that is completely intact. Since sulfide is rapidly weathered, we know that this little speck of stardust was collected very shortly after it arrived on Earth. To me, it seems almost like a small volcanic planet!

Barely melted space gems have been the focus of a great deal of fascinating and mysterious research that may reveal many secrets of the universe, which I will discuss another time. For now, enjoy the wondrous beauty of NMM 1833 and connect with Project Stardust on Facebook, Instagram, and Twitter to stay up-to-date!

FOTCM Member
A bright fireball lit up the night sky over the Brazilian states of Sao Paulo, Parana, Santa Catarina and Rio Grande do Sul.

FOTCM Member
Spain: They capture the explosion of a fireball over the sky of Catalonia.
05/23/2022

Ambassador
FOTCM Member
Here's a new updated information about the upcoming possibly massive meteor shower that will happen in the end of May. The exact time is around May 31 at 4h-5h UT. But recalculate for your local time. It will be mostly visible in continental USA and Mexico. Looks like in some states it will still be 30th of May. Essencially, it will be the night of 30-31st of May. Don't forget to look up!

TAU HERCULID METEOR SHOWER 2022 P. Jenniskens, SETI Institute and NASA Ames Research Center; Q. Ye, University of Maryland and Boston University; and J. Vaubaillon, I.M.C.C.E, Observatory of Paris, report that a meteor outburst of tau Herculid meteors (IAU shower 61) is anticipated for May 31 around 4h-5h UT this year. This outburst is unusual in that the debris was generated during the 1995 breakup of comet 73P/Schwassmann-Wachmann (cf., Luethen et al. 2001, J. Intl. Meteor Organization 29, 15-28). Independent calculations at I.M.C.C.E. and the University of Maryland, using slightly different inputs, now put the 1995 dust trail in the earth's path with an expected peak on May 31d05h01m and 03h52m UT, respectively. In both models, meteors will radiate from R.A. = 209 deg, Decl. = +28 degrees with an apparent velocity of 16.4 km/s (geocentric velocity 12.1 km/s). The outburst is expected to last about two hours. Observers in the continental USA and Mexico are most favorably located to see this event in new-moon conditions, with a radiant high in the northwest.

The authors note that there are two caveats. First, an unusual meteor shower will only happen if the meteoroid ejection velocities during the breakup and decay of fragments were a factor of 2.5 higher than under normal cometary ejection conditions. Because the comet itself is not near the earth, normal ejection does not have the meteoroids disperse far enough ahead of the comet to intersect the earth's path. The higher gas-production rate of comet 73P in 1995 suggests that ejection velocities may have been higher by up to a factor of 2.7. However, the ejection velocities of cm- and mm-sized meteoroids were not measured in 1995. Second, if the outburst happens, the meteors will be mostly faint. Rare tau Herculids are also known from regular cometary activity during normal returns. The Cameras for Allsky Meteor Surveillance (CAMS) project, which triangulates video-detected meteors visible to the naked eye, measured the orbit of 18 tau Herculids during dust-trail crossings in 2011, 2017/ and 2019; from this, the authors calculate a steep magnitude-distribution index of 5.4 +/- 1.1, meaning that there were five times more meteors of magnitude +4 than +3, five times more meteors of mag +3 than +2, etc. -- but with the camera sensitivity such that more meteors of magnitude +3 were detected. In practice, a few meteors were of magnitude +1, but most were near the +4 magnitude detection limit of the video cameras.

FOTCM Member
A bright fireball lit up the night sky over the Andalusia, Spain.

Bright fireball captured streaking in the sky above Puerto Rico.

Ambassador
FOTCM Member
Here's a link to the live feed of the potential meteor shower. It is scheduled to go live in 2 hours.

Ambassador
FOTCM Member
Just to update that nothing on the cameras so far. They say that the speed of the meteorites may be too slow to register on the camera. Or it is one massive bust.

Maybe the Universe has a sense of humor.

But there are still 4 hours to go until the predicted end of the potential shower peak, so everyone is still glued to the screen.

Interestingly enough, people in the chats say that they saw falling meteors in various locations in the US, so maybe the cameras are looking in the wrong direction.

Here's another stream where they also share various interesting information. And the astronomer who runs the channel *ghasp* believes in panspermia and that there is life on other planets.

Added: Ok, now it makes sense. The astronomer who runs the stream is Marc D'Antonio. He is "the Mutual UFO Network’s (MUFON) Chief Photo/Video Analyst and is CEO of FX Models, a company specializing in digital/physical models, and organic special effects in the film industry. His degree is in Astronomy and he specializes in the study of Exoplanets."

FOTCM Member
A bright fireball lit up the night sky over the Aragon, Spain.

THE TAU HERCULID METEOR SHOWER ACTUALLY HAPPENED: Forecasters were right. Debris from Comet 73P/Schwassmann-Wachmann-3 did hit Earth last night. Observers across North America witnessed the resulting display of tau Herculid meteors. It was not a meteor storm, as some had hoped, but instead a gentle shower punctuated by bright flurries.
Click to expand...

Many observers reporting to Spaceweather.com say the meteors were slow, they shined as brightly as 2nd to 4th magnitude stars, and their tails traced back to a radiant near Arcturus. These characteristics are in accord with debris coming from Comet 73P's breakup in 1995.
Click to expand...

The Canadian Meteor Orbit Radar (CMOR) in western Ontario detected more than 30 slow tau Herculids. Take a look at their radar sky map; all of the meteors were clustered near Arcturus, as expected. Independent radio data reported by Japanese astronomers reveal two peaks of tau Herculid activity, perhaps linked to two distinct debris streams from Comet 73P/Schwassmann-Wachmann 3. It is noteworthy that these radio and radar detections include very small meteoroids too faint to see with the unaided eye.
Click to expand...

One of the strongest meteor showers of the year is underway. You might not notice, though, because of the glare. The Canadian Meteor Orbit Radar (CMOR) is picking up significant activity less than 20 degrees from the sun.

Its source is sungrazing Comet 96P/Machholz, which has laid down a trail of debris in the early-June portion of Earth's orbit. When the shower peaks on June 7th, CMOR will detect approximately one Arietid every 20 seconds--a rate which ranks the Arietids among the top meteor showers of the year.

It turns out that June is the best month of the year for daytime meteor showers. When the Arietids subside, another daytime shower will take over: The zeta Perseids (ZPE) peak on June 13th. And then another: The beta Taurids on June 29th. If only we could see them...
Click to expand... 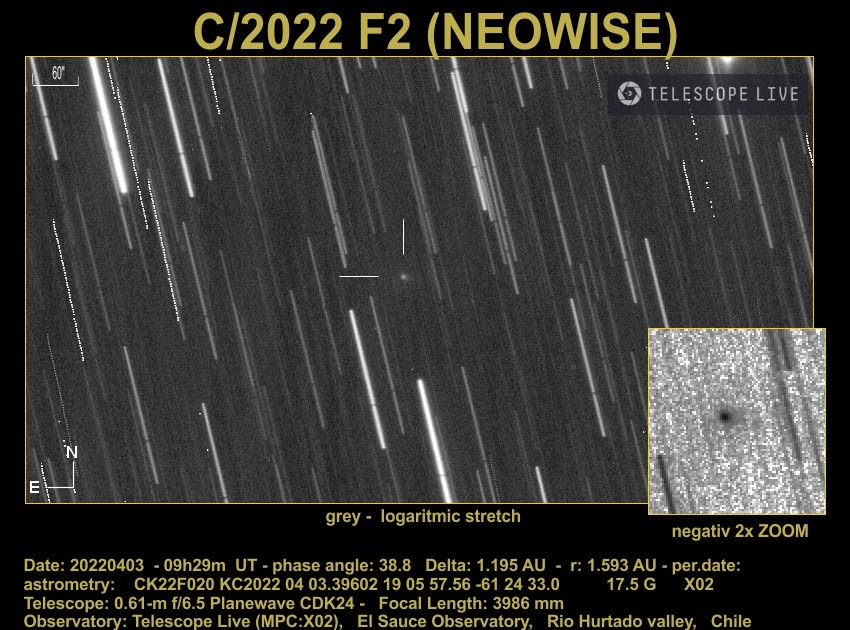 Our confirmation image (click on the images for a bigger version) 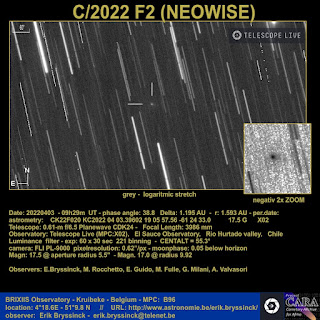 News from the meteor library: dust trail of comet 17P/Holmes​

Evolution of the dust trail of comet 17P/Holmes​

This article has been accepted for publication in the Monthly Notices of the Royal Astronomical Society, submitted by Maria Gritsevich, Markku Nissinen, Arto Oksanen, Jari Suomela and Elizabeth A. Silber
Posted by Paul Roggemans | Jun 3, 2022 | Meteor Library, News |

Abstract:
The massive outburst of the comet 17P/Holmes in 2007 October is the largest known outburst by a comet thus far. We present a new comprehensive model describing the evolution of the dust trail produced in this phenomenon. The model comprises of multiparticle Monte Carlo simulation including the solar radiation pressure effects, gravitational disturbance caused by Venus, Earth and Moon, Mars, Jupiter and Saturn, and gravitational interaction of the dust particles with the parent comet itself. Good accuracy of computations is achieved by its implementation in Orekit, which executes Dormad-Prince numerical integration methods with higher precision. We demonstrate performance of the model by simulating particle populations with sizes from 0.001 to 1 mm with corresponding spherically symmetric ejection speed distribution, and towards the Sun outburst modelling.

The model is supplemented with and validated against the observations of the dust trail in common nodes for 0.5 and 1 revolutions. In all cases, the predicted trail position showed a good match to the observations. Additionally, the hourglass pattern of the trail was observed for the first time within this work. By using variations of the outburst model in our simulations, we determine that the assumption of the spherical symmetry of the ejected particles leads to the scenario compatible with the observed hourglass pattern. Using these data, we make predictions for the two-revolution dust trail behaviour near the outburst point that should be detectable by using ground-based telescopes in 2022.


You can download this paper for free: Evolution of the dust trail of comet 17P/Holmes (14 pages).
Click to expand...