FOTCM Member
A bright fireball lit up the night sky over the Albacete, Spain.

2018 AH is estimated to be around 190 meters long, similar to the Tunguska asteroid, meaning it would be far more powerful than a nuclear bomb.​

A large asteroid the size of the Washington Monument is heading for Earth in late December that, if it impacts, would cause devastation far greater than an atomic bomb, according to NASA's asteroid tracker.

Known as 2018 AH, this asteroid is estimated to be about 190 meters wide and is set to pass by the Earth on December 27.

The asteroid is unlikely to hit the planet, however, expected to pass by at a distance of more than 4.5 million kilometers. For comparison, the distance between the Earth and the Moon is around 384,000 km. – about a twelfth of that.


But 2018 AH has come by Earth before – and at a much closer distance.

Back in 2018, it flew past the planet at a distance of 296,758 km, three-quarters of the distance from the Earth to the Moon. It had gone unnoticed due to its dimness, and scientists therefore didn't see it coming.

But what would happen if an asteroid the size of 2018 AH struck the Earth?

Ordinarily, it can be difficult to accurately guess, as size often varies. But in this case, astronomers happen to have a very good idea of exactly how destructive it would be, because something like this happened before.

THE LAST time a large asteroid struck the planet was in 2013 in Russia, when a 17-meter asteroid exploded in the atmosphere.

But the last impact from an asteroid this big was in 1908 above the Podkamennaya Tunguska River in Russia, in what has now become known as the Tunguska event.

This asteroid is believed to have been around the same size as 2018 AH, if not smaller.

When the asteroid exploded in the air several kilometers above the area, it produced a massive 12 megaton explosion, causing widespread destruction for thousands of kilometers. That would make it about 800 times more powerful than "Little Boy," the approximately 15-kiloton atomic bomb detonated during World War II over Hiroshima, and 600 times more than "Fat Man," the 20-kiloton one detonated over Nagasaki three days later.

According to Encyclopedia Brittanica, a US government report at the time stated that Hiroshima suffered 135,000 casualties, or more than half of its population, and Nagasaki 64,000, a third of its population.

The death toll from the Tunguska event was extremely low, however, with only around three people thought to have been killed in it, due to how remote and sparsely populated the region was. But the damage was still evident, with about 80 million trees completely flattened, winds of around 27 km., a second bursting around and a loud noise heard far and wide. Tremors and air waves were felt as far away as even Washington and Indonesia.

"The sky split in two and fire appeared high and wide over the forest," recounted a man who was about 65 kilometers south of the explosion.

"The split in the sky grew larger, and the entire northern side was covered with fire," he said. "At that moment I became so hot that I couldn't bear it as if my shirt was on fire; from the northern side, where the fire was, came strong heat. I wanted to tear off my shirt and throw it down, but then the sky shut closed, and a strong thump sounded, and I was thrown a few meters. I lost my senses for a moment, but then my wife ran out and led me to the house.

"After that such noise came, as if rocks were falling or cannons were firing; the Earth shook, and when I was on the ground, I pressed my head down, fearing rocks would smash it," he said. "When the sky opened up, hot wind raced between the houses, like from cannons, which left traces in the ground like pathways, and it damaged some crops. Later we saw that many windows were shattered, and in the barn, a part of the iron lock snapped."

The Tunguska event is the largest in recorded history – though larger prehistoric ones happened – and is one of the largest explosions ever recorded, far more powerful than many nuclear bombs.

If 2018 AH hit, it could cause something similar.

According to NASA, any asteroid 140 meters in diameter or larger could have a potentially catastrophic impact if it crashed into Earth.

The destructive nature of asteroids, even small ones, is something well-known to experts, with space agencies around the world monitoring for potential catastrophic impacts, as well as researching potential means of stopping them.

One method for possibly stopping the impact of an asteroid is through the use of deflection, which would mean launching something to slightly alter its path. The most prominent of these efforts is the Double Asteroid Redirection Test (DART) Mission currently underway, the result of efforts by NASA and the Applied Physics Laboratory.

In layman's terms, it means punching an asteroid with a rocket with enough speed to change its direction by a fraction of a percent.

The DART Mission is humanity's first real attempt at testing a defense against an asteroid impact and was launched towards the Didymos binary asteroid system.

Moderator
FOTCM Member
SpaceWeather reports of the "strongest outburst of Andromedid meteors ever detected by Canadian meteor orbit radar". An event that has taken researchers entirely by surprise.

It says that they're remnants of Biela's comet that swung by earth in 1852, and that Laura wrote about here: Comet Biela and Mrs. O'Leary's Cow -- Sott.net

ANDROMEDID METEOR OUTBURST: The Andromedids are back. Over the weekend astronomers reported an outburst of more than 100 faint meteors per hour. "[It was] the strongest outburst of Andromedid meteors ever detected by the Canadian Meteor Orbit Radar (CMOR)," says Peter Brown of the University of Western Ontario. This radar sky map shows a hot spot of meteor activity on Nov. 28th:​ The shower's not over yet. "The current outburst is ongoing and it may be another few days or even a week before the activity ramps down," says Brown. "These meteors are too faint to see with the naked eye, but they are easy targets for our radar."​

Andromedids are debris from Biela's Comet, known to historians as "the comet that split in two." 3D/Biela started to fall apart not long after it was discovered in 1772. It was a double comet when it swung by Earth in 1852 and, after that, was never seen again. In 1872 and 1885, thousands of meteors shot out of the constellation Andromeda as Earth passed through Biela's remains. Chinese records described "stars that fell like rain."​ Above: Andromedids on the night of November 27, 1872, by Amédée Guillemin [ref]​

Then the Andromedids vanished, too. The shower has been weak or absent entirely since the late 19th century. Only a surprise outburst in 2011 signaled that Biela's debris might still be lurking nearby. This week's activity is even more promising.​

Bill Cooke of NASA's Meteoroid Environment Office (MEO) is one of several experts who have been modeling Biela's debris streams, hoping to forecast a return. "Our models generally do not do well in predicting the timing or intensity," he says. "However, this year our model got the timing roughly correct." This plot shows current radar data (red dots) vs. predicted debris stream crossings:​ 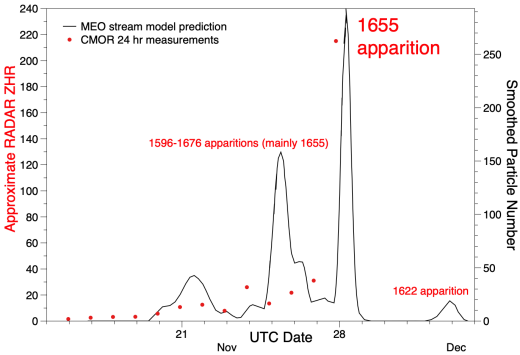 According to Cooke's model, the outburst on Nov. 28th was caused by a stream of dust laid down in 1655--interestingly before the comet fell apart. "We didn't think the 1655 crossing would produce much of anything," confesses Cooke. "So the outburst came as a bit of a surprise."​

A team of astronomers led by Paul Wiegert (including Brown) had already predicted a strong naked-eye Andromedid outburst in December 2023. If they are right, the display two years from now could yield as many as 200 bright meteors an hour, surpassing even the Perseids and Geminids. The current outburst is providing new data for their stream models, and could help improve the predictions.​

Stay tuned for updates as the shower continues.​

FOTCM Member
A bright fireball lit up the night sky over the Sevilla, Spain.

Bright fireball captured streaking in the sky above Henan, China.

FOTCM Member
A bright fireball streaked through the night sky over the Ciudad Real, Spain.

FOTCM Member
A bright fireball was recorded streaking through the night sky over the Popocatepetl volcano, Mexico.

A spectacular flash was seen in the vicinity of the Popocatepetl volcano in the early morning hours of this Thursday, December 2 at 1:00 a.m.

The cameras of the National Center for Disaster Prevention (Cenapred) that constantly monitor the activity of the colossus captured the light that appeared on the right side of the image.

Some people on social networks believe that it was a meteorite, while others that it was a shooting star, the truth is that the authorities have not spoken until now.

FOTCM Member
Bright fireball captured streaking in the sky above Morocco and Spain.

This is getting some press coverage. Its orbit will cross from outside Earth orbit to inside this Saturday, then cross back out in mid February.
In mythology Nereus was "the old man of the sea" and his consort was Doris.

Nereus is a very small asteroid whose orbit crosses the orbit of Earth. NASA JPL has classified Nereus as a "Potentially Hazardous Asteroid" due to its predicted close pass(es) with Earth.

FOTCM Member
Bright fireball captured streaking in the sky above Spain and Portugal.

FOTCM Member
A fireball was spotted over the skies of Sezze in the province of Latina south of Rome around 21:20 on 3rd December. 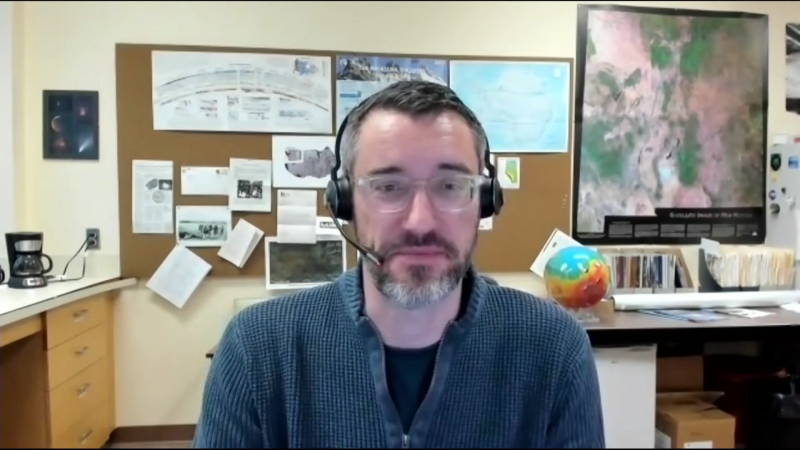 'Where did it land?': Doorbell camera captures meteor over Rocky Mountain House

People in Leduc, New Sarepta and south Edmonton reported seeing a flash in the sky and hearing a loud booming sound Tuesday night.