Hi y'all. I'm a little hesitant about posting this since it is not my own experience but rather a close friend's experience so I don't know all the exact details. I feel I know my friend well enough to be rational and reasonable person so I believe what he's told me or at least that he did have some unique bizarre experience. I thought it was interesting enough to post here.

My friend and I both have lived in the same apartment complex when we were kids. His account is one of the earliest from his memory. Although he was old enough to have a bed at the time, his parents only had a crib for him. He also shared a room with his older brother. One night after he and his brother were put to bed, he really wasn't able to sleep. As he sat in his crib, he saw his bedroom closet doors slowly and quietly open. In a state of bewilderment and fear, he sat in his crib motionless. Out from the closet, he saw three tall, lean, dark figures slowly amble to his crib. One of the things he noted was the peculiar way they walked. Although they moved smoothly and slowly, they appeared to not have a human gait but more ape-like. When they approached his crib, they simply gripped the side of the crib and slowly peered in, looming over him and would just stare at him. He could then see that they were hairy and apelike in appearance. Although they were close enough that he could feel the warm air from their exhalations, he simply laid motionless and partly felt instinctively not to move and partly paralyzed in fear. After what felt like an eternity, they withdrew and slowly returned to the closet and closed the doors. My friend says that he remembers this happening nearly identically just a few other times. In all instances, his brother never woke up and he never really remembered having any sort of harm done to him. He told his experience to his brother but his brother never believed him or took it seriously. As he grew up, the experiences stopped and his family moved out of the apartment. He had brushed them aside as the result of a young child's hyperactive imagination and then he simply forgot about them.

Several years later in his teenage years, my friend had a girlfriend who would baby-sit a young boy of a family friend. She also had a brother that would occasionally baby-sit the young boy too. His girlfriend's brother told my friend how he could make the young boy behave by teasing the boy about how monkeys would get him if he didn’t behave. The young boy was always very terrified by this threat. He would cry and could not be put to bed if he had to sleep in his room. My friend then recalled his old experiences and asked where this young boy lived. My friend suddenly had to rethink and dwell on his own experiences as a child when he learned that the young boy lived in the same apartment building and same room as my friend did. Although he never knew what exactly the young boy experienced in his room, my friend could only speculate that it was similar to his own.

I was always fascinated by this story because it doesn’t fit into any pattern of any supernatural experience that I’ve read about. From my friend’s observations, the entities didn’t appear to be human spirits which, from what I’ve read, would be more likely be attached to a place. But I’ve thought that entities of non-human origin like this would be attached to a person and not a place. Also, from what I recall, this apartment complex wasn’t very old and didn’t have a long history. Additionally, I’ve never really heard of any other history in this area before there was any development there.

I just came across your posting and it reminded me of something I saw on a television program last night, so I thought I'd reply, just in case you were still looking for answers.

Perhaps these monkey beings were the result of somebody naive or foolish being irresponsible with magic or a Ouija board without realizing what they might be inviting in.

The show I saw last night was Paranormal State Season 4 Episode 3. The team was trying to help a couple and their young child deal with what initially appeared to me to be poltergeist activity: a moving shadowy figure, sounds including knocking, scratching and even growling, furniture moving including a bed levitating and a young child suddenly acting differently and even using quite vulgar language without ever being exposed to such language.

Through their investigation they learn that the activity was supposedly the result of someone having irresponsibly demonstrated magic.

The woman's brother admitted that a few years earlier, he was demonstrating magic to his curious sister and brother-in-law. He cast a circle and summoned a shadow demon which, upon appearing, charged immediately at the sister and her husband. They ran out of the house screaming, breaking the circle and releasing the demon from the brother's control.

Eventually the team aids the family to cast out the demon with apparent success.

I was always terrified of my closet as a kid, so I really related to your post. I hope some day somebody finds a way to resolve whatever is going on so no child, or anyone else for that matter, has to go through what your friend and this other boy experienced.

Administrator
Moderator
FOTCM Member
It sounds like an urban legend. 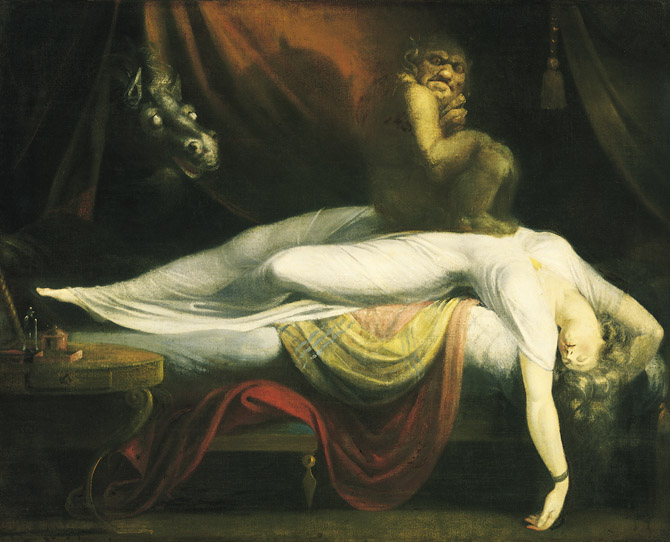 That's always the problem with second hand information. At least it wasn't a friend of a friend. Wait a sec, the second one was pretty much that.

No offense, Slavronin, but for the sake of greater clarity, is there any way your friend has an active imagination, perhaps prone to exaggeration or attention seeking behaviour?

Very much so! Given how odd the story is and how little data is available, at best, one can only file this story under miscellaneous until some other similar, independent story is found.

However, I feel that I know my friend well enough to believe that he isn't making all this up. I've only heard him a few times telling this story to close friends. In fact, on one occasion when my brother tried to have him tell the story to two casual friends, my friend was visibly annoyed and reluctant and did not go into great detail when he explained it.

That's always the problem with second hand information. At least it wasn't a friend of a friend. Wait a sec, the second one was pretty much that.

No offense, Slavronin, but for the sake of greater clarity, is there any way your friend has an active imagination, perhaps prone to exaggeration or attention seeking behaviour?

No offense taken. I realize this story is out on a limb. But I've never really seen my friend embellish his stories, try to seek attention or be real manipulative. I've noticed his other stories seem pretty consistent and he generally has a pretty good memory. However, to this day, he routinely does have odd dreams and less often, experienced weird phenomenon in his sleep such as a presence in his room when no one is there. Still, more or less, a down to earth guy.

I feel my friend may have an innate psychic talent of some sort or have some ability to access an altered state of consciousness naturally. Interestingly, though, I think he would rather shut these things off and not have to deal with any of it. Usually, he sleeps with the TV on in his bedroom because he claims that he can hear the TV in his sleep and not fall in a deep sleep. Yet he says he feels better rested by being in a lighter sleep.

I thought it would be interesting to find other stories or information to share with him. I've tried to pique his interest in metaphysics or higher truths by discussing some of the subjects on this website and some of the Cassiopaean material.

Well, it sure is interesting. I'm glad you didn't take offense. In reading my comment through hindsight I realize my joking a bit was a little insensitive to a serious and possibly troubling question. I apologize for that.

I think I was trying to appear witty, one of those need-to-seem-intelligent programs I'm working on. But I was genuine in trying to consider possible explanations other than paranormal in the hopes of coming to a greater understanding.

Things like this do make me wonder about any residual energy from a previous tenant or worse, something they may have conjured out of naïvety which remained after they left.

I don't blame your friend for being guarded about it. Many people, if not most, would assume embellishment, invention or flat out lies.

Administrator
Moderator
FOTCM Member
Well then, if it is true, it could be a little hyperdimensional bleedthrough. It also sort of sounds like some of the descriptions from "Operators and Things."

FOTCM Member
If nothing else, it would make a good scary story around the campfire.

He could then see that they were hairy and apelike in appearance. Although they were close enough that he could feel the warm air from their exhalations, he simply laid motionless and partly felt instinctively not to move and partly paralyzed in fear.
Click to expand...

I think your friend should visit hypnotherapist if he wants to really find out what happened. Kids have gift to see things because they aren't poisoned with junk food that decreases they psychic abilities and education that kills their belief . Kids are only ones that can see truly with their eyes and PTB don't want that. On other hand kids have great imagination. This paralysis could been invoked by that beings, I think it's hard to know it is it from fear or from them. Your friend could have been abducted(but he couldn't have been also), this fell on my mind because you said he has some abilities and I remember from reading some books about abductions that people get some psychic abilities. On other hand he maybe has natural abilities from birth. this monkey people could easily been STS 4D if they have power to manipulate persons perception field and monkey could be only cover for real thing.
You must log in or register to reply here.
Share:
Facebook Twitter Reddit Pinterest Tumblr WhatsApp Email Share Link
Top Bottom