This topic could fit many categories. Just yesterday I was searching another topic and came across giants in New York state. I have read some things on giant skeletons being found around the world but this is in my own back yard. In Pennsylvania there were giant skulls that mysteriously went missing from a museum. These giants do not fit the timeline so they are not discussed. History has definitely been toyed with and continues to be. Things that make ya go hmmmm. If one could travel through history imagine what could be put in place for us to find. When the giants return it's going to get real scary.

I believe in giants. There are so many accounts of that. From the bible to history and maybe science. I think one of the main reason of their extinction is there inability to survive their preys unlike smaller- ape- originating-humans. But who knows! we might discover fossils someday.

The bit about it being Photoshopped doesn't seem likely, because what do they have to gain by having one giant dude way in the back, if it was an army of giant dudes then i'd say it was Photoshopped. :D

That's bizarre. Couldn't be that the others are children?

good thought. I didn't thought about that possibility.

somehow the guy's left side is not clearly visible. maybe bad editing.....

Don't think so Graalsword, because if they were children, they would be at the front of the procession, and not way at the back where the tall dude is, osit.

Ambassador
FOTCM Member
I don't think it's strange to spot a very tall/'giant' man, or woman. I once saw a guy who was way more than 2 meters (6 feet) tall.

Don't think so Graalsword, because if they were children, they would be at the front of the procession, and not way at the back where the tall dude is, osit.
Click to expand...

You're very probably right. Another thing that I thought lately, that makes me think that the others may not be children is the guy behind him. There is a guy standing alone, in the back, who doesn't seem to be a children, and he seems to be of average height and therefore much shorter than the tall guy.

Just to give some sense of scale relative to us on giants. ;)

Just to give some sense of scale relative to us on giants. ;)
Click to expand...

interesting but the highest's suggestion of the hight some giants might have had is 30 feet as of my knowlege, so not that big but still very high.

c.a. said:
February 24, 1996
Q: (L) I was reading some of the transcripts earlier today. One of the things I read was about the Nephilim and their interactions with human beings and about other planets and molecularization, etc. Then, I was reading about the planet Kantek. Are there any human beings, on Earth, at the present time, who carry in them the Nephilim genes?
A: Yes.
[...]
Q: (L) Would these Nephilim genetics be passed down in the natural way, or would they be the result of genetic manipulation by genetically altering a fetus and then putting it back?
A: No to latter. One clue: double Y chromosomes.
Q: (W) That's male...
A: Nephalim were.
Q: (L) They, were male. Women are a double X, men are XY.
A: Prisons are filled with double Y's with monstrous personality disorders, almost always Caucasian and over-sized.
Q: (L) On TV they interviewed a serial killer. He was HUGE! He described killing. The shrink who was analyzing said he did it because he wanted to get caught. I did NOT get that feeling. I think he did it just because it was what he did. [...] Big. Caucasian. My, my, my. Is there any other clue you can give?
A: Nephalim are not currently on your world, just trace residuals.
Q: (L)Trace residuals in people. And there are supposed to be 36 million of them coming...
A: With the wave.[/color]
Click to expand...

(Color is my emphasis)

I haven't seen it mentioned yet but for what it's worth there is a rare condition called acromegaly which occurs evenly across all populations at a rate of about 1 in 33,000. Source: http://jcem.endojournals.org/content/84/12/4379.full

Ambassador
FOTCM Member
[quote author=MikeJoseph82]
I haven't seen it mentioned yet but for what it's worth there is a rare condition called acromegaly which occurs evenly across all populations at a rate of about 1 in 33,000. Source: http://jcem.endojournals.org/content/84/12/4379.full
[/quote]

Interesting article this business of GH secretion. Noted the psychological aspects of this piece too:

One need only review the striking positive correlation between stature and financial/professional success in our society to be convinced that “heightism” is a true phenomenon. However, when present to an extreme degree, tallness ceases to be an advantage and may be perceived as a burden, resulting in both physical, as well as psychological, handicaps. This has prompted the pharmacological treatment of constitutionally tall adolescents with sex steroids to accelerate epiphyseal fusion, a practice that has been in existence since the 1950s (43). Whereas tall girls, in particular, often report teasing and social difficulties as a result of their size, these problems generally disappear in adulthood, when the majority of normal tall men and women indicate satisfaction with their stature (44). Because no convincing data indicating lifelong psychopathology as a result of tall stature exists (45), it may be reasonable to pursue counseling as the initial treatment of choice for otherwise healthy tall adolescents with psychosocial difficulties related to their height. In contrast, pathologic tall stature as a result of GH excess obviously results in heights that are far beyond those observed in constitutionally tall individuals. Although no in-depth information regarding the psychological profile of patients with gigantism is available, case series indicate a high incidence of severe depression, social withdrawal, and low self-esteem (3).
Click to expand...

While reading Antiquities of the Jews by Flavius Josephus for the Historical Events Database I ran into a tantalizingly short snippet which seems relevant here, so I thought I would mention it. It's in Book V, Chapter II, § 3 (Loeb 5, 125):

125 3. For which reason they removed their camp to Hebron; and when they had taken it, they slew all the inhabitants. There were till then left the race of giants, who had bodies so large, and countenances so entirely different from other men, that they were surprising to the sight, and terrible to the hearing. The bones of these men are still shown to this very day, unlike to any credible relations of other men.
Click to expand...

Not much to go on and still less to make of it, I'm afraid.

The Wikipedia article on Hebron doesn't help us either.

EDITED to add: a few additional clues might be found on this page though -- Giant (mythology)

We have a lot of cases in Romania where people found huge skeletons, measuring more then 3 meters in height. Back home their are called hyperboreans.

The Greeks thought that Boreas, the god of the North Wind (one of the Anemoi, or "Winds") lived in Thrace, and therefore Hyperborea indicates a region that lay far to the north of Thrace.
The Boreades were thus believed to be giant kings, around 3 metres tall, who ruled Hyperborea.
Click to expand...

During an interview on Coast to Coast some years ago, Steven Quayle talked about a giant that was shot and killed by the US military in Kandahar Afghanistan.

It is said that the soldiers noticed something in a cave and while inspecting the cave they encountered a giant 12-15 feet tall being having red hair, 6 fingers, 6 toes, and a double row of teeth.

What followed was that the soldiers opened gunfire at the moment the giant attacked the team. According to a witness of the horrible event, one soldier was killed by the giant and it took about 30 seconds to kill the being.

After the giant was dead it seems they have loaded it on a transport pallet and flew it to an unknown location in the US for further investigation.

Since this story raises many questions, L.A. Marzulli recently did an interview with a member of the US military who was present at the shooting of the Kandahar Giant!

Below a segment of this interview, whereby the witness goes into details about the encounter with this giant in Kandahar Afghanistan. This is an absolutely incredible interview!
Click to expand... 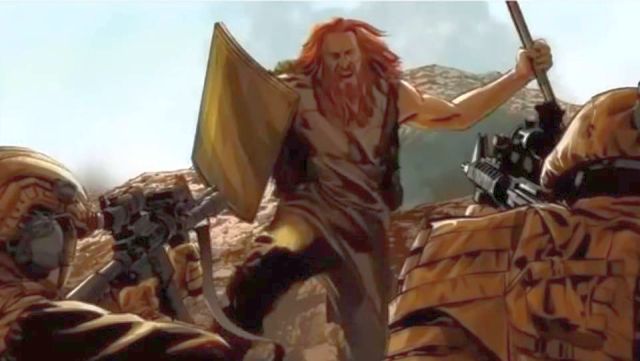