Does anyone have any plans for the coming Ice Age?

FOTCM Member
I have some down mittens and in subzero weather, my fingers still manage to get cold after some time. As an alternative to buying chunky overmittens that go over your regular mittens, Zippo makes these hand-warmers that take fuel to run. Depending on how much fuel you add to it, it can last up to 12 hours! Amazon has a sale on these right now:

I have one already, and am planning to get some more to share. Perhaps once this ice age arrives and my neighbors are forced to relocate, we can have these on hand along with extra fuel, and replacement parts. These don't take up too much space, and the value they can bring could be high!

Here's a video on how these can be used:
I had some trouble interpreting the instructions on the pamphlet they gave

Obi said:
I would like to also share some information from two psychics I came across on the Internet. They are both in Polish language, so of little use for those who are not Polish, but they provide quite interesting insights for the immediate future.

One, is an old lady, who travels in her sleep to the future and gives very precise insights into how things will progress. Why I find her interesting is that she insists that our Sun has a twin. She made a nice drawing to show our solar system with 2 suns. She claims that this is what her guides told her. She also sees fire from the sky and small burning fireballs hitting the Ice cap and causing it to melt. She also made a nice drawing to depict it. Most likely she refers to the comet fragments raining on the North Pole. She also describes in a very great detail the pole shift and resulting cataclysms and gives exact instructions what to do in order to survive those cataclysms. She describes vulcanic eruptions all over the globe and resultant air pollution, hurricane winds, massive earthquakes and tsunamis and then rain of fire from the sky. It makes quite a lot of sense and her story is very well aligned with what we know from the C's. But the most intriguing part is one of her dream time travels when she goes to the year 2028 and she says that at that time the Earth or rather human civilization is destroyed, cities are a pile of rubble with very few people surviving here and there and hiding in caves and permeating feeling of hopelessness. So, if this is correct, we may have 8 more years at max before it's all over for this civilization.

The other source is Mr. Jackowski, a prominent Polish psychic with 30 years of track record of correct predictions. He found thousands of bodies of missing people, predicted 9.11, the financial crisis of 2008, shooting down of the Russian military jet in Turkey, not to mention correct weather predictions for upcoming seasons (last 2 years that I follow his channel on YT, he was spot on with his weather predictions). He also likes Putin and considers him a peacemaker. His predictions from the last year regarding 2020 are quite interesting. He predicted in December the escalation of tensions between USA and Iran. He predicted the provocation in regards to the Ukraine plane shot down, he also described precisely how the escalation of the war with Iran will progress and believe it or not, he said the Israel will be destroyed as the result of the Iran tension escalation and it may happen even this current year. So, he is a very good source of short time predictions and I always follow him to see what's in stock for the immediate future. Now, he made 2 quite interesting predictions in regard to Poland in the past 2 years. First one was that he sees Polish people migrating South and he said the safe place for the Polish will be in Hungary and Romania, later adding Bulgaria too. He said he sees highways full of people moving by foot towards these 3 countries. He was not able to say why they move, but pointed out it was related to the air quality and that people could not breath and had to move elsewhere. He described it on 2 separate occasions. My speculation is that this mass migration is related to the return of the Ice Age and breakdown of the weather in Poland forcing people to move by foot to more southern location. Migration by foot suggests either that driving conditions are such that you cannot use the car to move (too much snow?) or the fuel is scarce, or both. Another interesting prediction from the end of September 2019 was made after the elections in Poland. He said that this new government (not really new, since the same party won the election) will only operate 2 year after which it will cease to function. He could not say why, but pointed to some "random external event" as a possible cause. Two years from 2019 is winter of 2021. Why would a government cease to function? Even during war governments function, so this could point to some serious environmental event that completely shuts down the government. The Ice Age rebound fits the bill, since the snow would literally bury the capital and the governmental infrastructure. This timeline fits well with what David D from Adapt2030 predicts as far as what he calls Mini Ice Age return. He shows Zarahova's et al chart of magnetic currents on the sun cancelling themselves out with the peak in 2021. This is when he believes the Mini Ice Age similar to Maunder minimum will start. So, if you consider these 2 sources converging on the specific year, one psychic, one based on the science, we may in fact see the Ice Age rebound in the winter 2021/2022 or at least the beginning of the rebound, which itself may take 2 or more winters. So, my opinion is that already in 2021 will see the return of the Ice Age.

One more prediction I saw was of Baba Wanga (from Bulgaria) for year 2021 and she said in December we would see the 2nd Sun in the sky. Once we see it, the countdown to the cometary bombardment starts, since the 2nd Sun will knock a new cluster of comets towards the inner solar system. But what about the previous comet cluster? It is still lurking in the background somewhere. So, we may have in fact a double whammy, one hit from the old cluster and the other from the new cluster. One way or the other, once we see the 2nd sun, we should know that the end is near.

So, based on these predictions and the recent C's warning, I am of the opinion that the greatest show on Earth will start in 2021 with the rebound of the Ice Age that will set people and nations in motion, followed by the escalation of the war between USAvsRussia+China, followed by the pole shift and destruction of the infrastructure, followed by the comet impact(s) to finish the human civilization off. All happening till 2028.

The next 8 years will surely be an interesting time to live and follow. And when the Wave will arrive in all this chaos is anybody's guess.

So, buckle up guys, the greatest show in the Earth's history is about to begin!!!

Wow. The small comet part got me by surprize because a couple of weeks ago I had a strange cosmic dream. Dream it self was pretty vivid and engaging. I were dreaming that some small mm size stone falling from the night sky hit my face. The hit was so strong that it felt almost physically. When the stone hit me I saw suddenly a vision of aliens landing all over the place. I had strong sense of a cosmic threat and defending my self. Next vision was me and my mother holding some laser weapons or something of that sort and we were shooting at them to defend our selves until they left. The wierd part is that two days later I got sick with some fever. Body temperature was at 38. No sweating or coughing only felt like extreme heat and my whole body aching. Very very unusual. As far as I recall I never had this kind of fever before. I believe it was some virus because I were consuming zinc like candies until i got better. Elderberry helped me very much as well with a little bit of vitamin c.

FOTCM Member
About suitable clothing or accessories for extreme cold, last year I found on ebay, these sheepskin caps, they are super warm and do not cause sweating or extreme heat, I think the sheepskin regulates the temperature and you can find them used, in very good price still, but in very good condition. 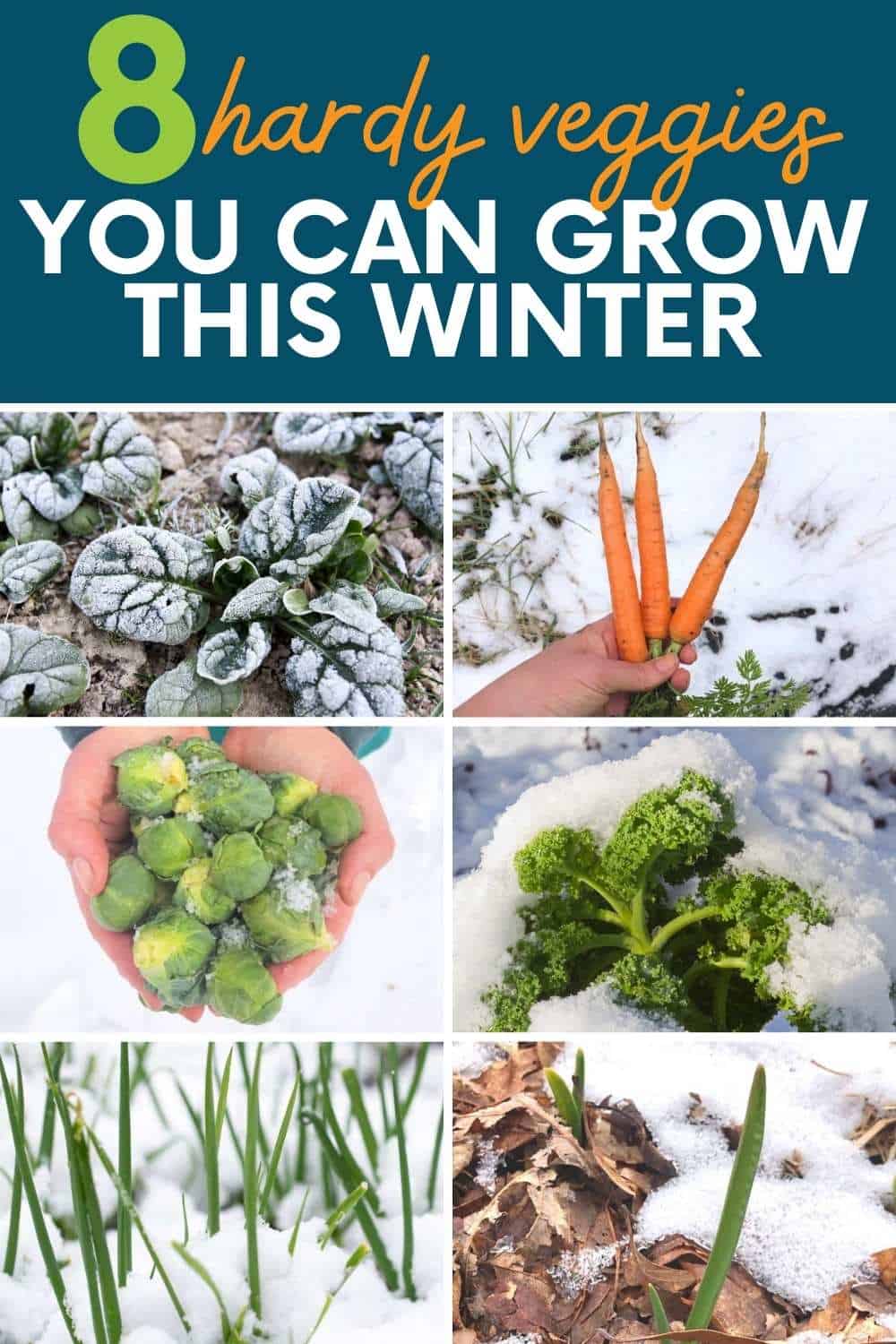 8 Plants to Overwinter for Winter and Spring Harvests

Find out which plants can be started now and overwintered for a spring and winter harvest: onions, Brussels sprouts, and more!

Here's a good article about growing vegetables in the winter - and also seeding certain crops so that they pop up earlier in the spring (overwintering the plants in the soil, tucked into a nice bed of compost).

I remember when I was working on a farm a few years ago - the cabbages were purple and green globes of ice in the morning... but after a few hours of sun, they were perfectly harvestable and edible, and ready for sale.

Some veggies like carrots and brussels sprouts actually taste better in the winter. Kale, that strange creature, can also survive being frozen solid.

Many vegetables are loaded with oxalates, so it is not so good to eat a lot of them. But I think this is still good information, for instance if you're growing greens for your chickens or whatever.