FOTCM Member
Here is a video from The HighWire showing how masks create a very toxic breathing environment that go beyond any standard/codes in the US.
https://www.facebook.com/video.php?v=871855679966265

aragorn said:
I think we need to lift our spirits up with any little thing we can come up with. Right now, I'm not sure what those would be...
Click to expand...

Hmm, well that would be through networking (I think), and of course, diligently finding jokes and memes that thoroughly mock and ridicule our oppressors. I think Pam Popper has put forward an intriguing idea:

psychegram said:
Masks. Outside. In Florida. In the summer.

It is shocking that they can maintain the pretense that this is about public health.
Click to expand...

I live in Florida and I've seen some people wear masks in the pool. People are about to start voluntarily waterboarding themselves lol! But as long as that keeps me safe right? God bless the peons for their sacrifices!

psychegram said:
Masks. Outside. In Florida. In the summer.

It is shocking that they can maintain the pretense that this is about public health.
Click to expand...

Maybe they need a legal challenge to their stupid rules?

Ruth said:
Maybe they need a legal challenge to their stupid rules?
Click to expand...

It's going to get interesting. They can now pull your liquor/business license if you dont comply with some of the rules here.

genero81 said:
<snip>
In the interview that Keyhole did with James Corbett, Corbett made the point that now is the time to try to get people to see what's happening because once they have become too invested in the deception, they're not likely ever going to be able to see it for what it is.
Click to expand...

I am very afraid that this point has already been passed, at least where I live. When I talk to people who already bought into the narrative let's say three months ago and I ask them now, if they thought about what I told them then or even changed their mind over it (more carefully worded, of course, and not so directly), the answer is always no. Even if I point out that they answered me THEN that such things that I suspected would never happen (even laughing at me) - happened! (like fines, mask obligation, continuity of measures...)Then they say somethings along the line of "well, they had to do that, it is still only an exceptional situation, the pandemic still rampaging through our cities...". So I think that this might be one result of splitting societies in tiny bubbles, who endlessly repeat themselves. And I also think from my personal experience that you can only "convince" someone who is already doubting and questioning . And these peeps will find their way, with or without me. I know that sounds a little black pilled, but I am not complaining, not losing strengh or good humour. It is how it is.
S

Had an interesting situation today, went to get my hair cut - YES, the government has deemed it okay for us in England to now get our hairs cut by a professional.

Anyways, I walk in to my usual place, notice they now have those plastic thingy majigs everywhere and everyone is wearing a mask.

I'm taken to my station and before I sit down I ask the barber if I need to wear a mask. He looks at me and asks me if I have one, I say sadly yes, but it's in my pocket... I then ask if I can choose not to wear it. He says, yeah, upto you... I'm like, okay then, that settles it, I choose not to wear it.

I proceed to have my haircut mask-free.

May the covid-gods take mercy upon my sinning soul.

To make matters even worse and for sure cause possibly more damnation upon my soul, I dared book a flight as well - YES, the government has now deemed it okay for us to venture beyond this island.

I'll be paying penance to the covid-gods-that-be for I have been a sinner today.
Last edited: Jul 4, 2020

Jones said:
Bombard pointed out paralysis on one side of Melinda Gates face as well. Vaccine injuries?
Click to expand...

Might it be cosmetic surgery? Done a while ago?

Ocean said:
This all sounds very strange. Lockdown within one hour, not allowed to get emergency provisions, even for little babies.
Weird.
Click to expand...

And it's only certain suburbs. Not the people who tested positive, but whole communities!

Zar said:
Here is a video from The HighWire showing how masks create a very toxic breathing environment that go beyond any standard/codes in the US.

At one time this was OSHA Hygiene 101, so what is going on with these guys, where are their voices! It's pathetic.

Hello to all of you
I found this document, dated May 20th...
I don't know if you know him.
I found it on Anne Givaudan's website: Be, of Anne Givaudan: Accueil - Editions SOIS, Aura SOIS Formation - Soins esséniens - in the "Robin Hood and Corona" section.
I'm not a doctor, but outside of medicine there are things that I think some of you might be interested in.
French text of 156 pages ...

REPORT OF AN INVESTIGATION BY A GROUP OF RESERVE OFFICERS INTO THE COVID-19 PANDEMIC AND ITS LINKS TO SRAS-COV-2 AND OTHER FACTORS
and its relationship to sras-cov-2 and other factors.
Standby executives investigated for 50 days to clarify issues related to the 2020 "pandemic".
The Report issued has been banned from further distribution at this time.
However, in view of the urgency and seriousness of the facts, we have chosen to communicate it to civil society all the same.
You have in your hands the "general public" version, with all references to the Group and the Unit's acronyms removed.
Télécharger le rapport

‘They pledged to do better’: Gov. Brown meets with troopers who refused to wear masks in coffee shop

Three renegade state troopers get a little re-education from Oregon governor "Lock-Down" Brown. One of the original four is on administrative leave for daring to say “Governor Brown has no authority to take our civil liberties. We aren’t going to wear masks.” 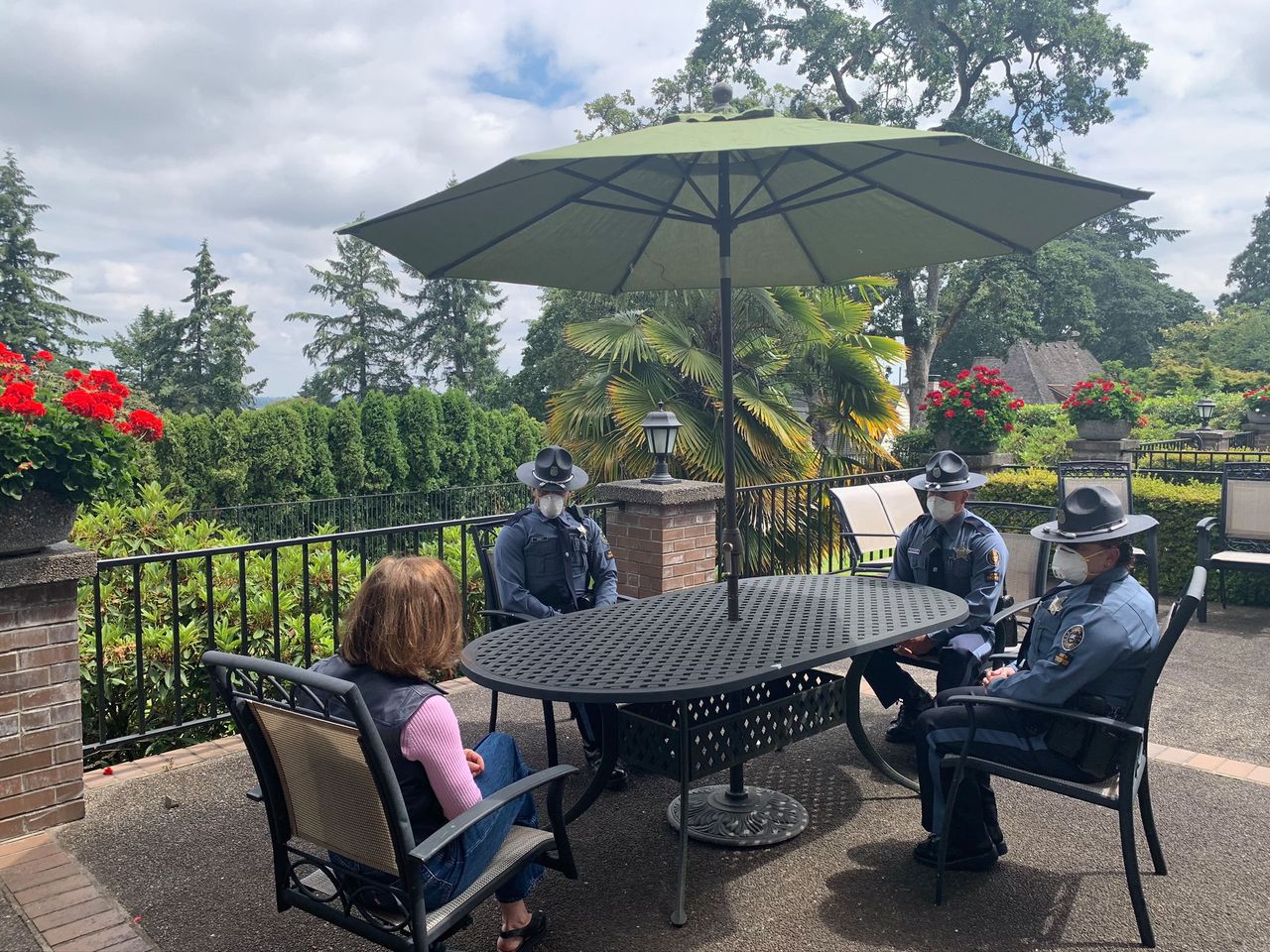 ‘They pledged to do better’: Gov. Brown meets with troopers who refused to wear masks in coffee shop

She wrote that Friday’s discussion led to officers agreeing with her that face coverings save lives, and that they will be wearing them now.

manitoban said:
children are supposed to be learning about life, reading facial expressions
Click to expand...

That's an interesting point, specifically about the facial expressions. I mean, the kids mostly learn on their parents, and hopefully the family doesn't wear masks at home, but still, this is at least to some extent impairing the children's development in terms of understanding human interactions. It's kind of like driving a whole generation towards autism, which goes in line with the whole vaccine business and makes sense in terms of the overall agenda. It makes people less secure and able to resist and be independent.


etezete said:
Then they say somethings along the line of "well, they had to do that, it is still only an exceptional situation, the pandemic still rampaging through our cities...".
Click to expand...

That's why, as the Cs also said, people will need more suffering before they start thinking. In their general cluelessness about most things, they're still able to believe it's all necessary and temporary. They are not aware that they believe the things they believe because people who always lie are repeating those things every day. It's really only one's own suffering that ultimately has to lead to some kind of awakening, because nothing else will make these people uncomfortable enough to question the narrative.


SOTTREADER said:
I'm taken to my station and before I sit down I ask the barber if I need to wear a mask. He looks at me and asks me if I have one, I say sadly yes, but it's in my pocket... I then ask if I can choose not to wear it.
Click to expand...

That's generally a bad strategy. From my experience, if you ask, they usually say you should. You just got lucky with this one. If you don't ask and don't wear it, usually they don't say anything. You're just giving them a chance to tell you to wear a mask and making it more difficult for yourself to argue your way out of it.

They've been instructed to tell people to wear masks, but if they're normal human beings, they don't have much inclination to do it. So if you don't ask, their natural inclination is likely to win and they'll just keep quiet. If you do ask, then for them to say "no, you don't have to", they'd have to go against instructions, which most people, being pretty authoritarian, don't wanna do.

Also, the barber actually asked you whether you have one, offering you a way out. Why the hell would you say 'yes'?

SOTTREADER said:
I proceed to have my haircut mask-free.