JEEP said:
Can't help but notice the parallels between the former Trump crowd highway rallying and the Canadians showing support for the Truckers Freedom Convoy:
Click to expand...

Former Calgary Flames hockey player Theo Fleury joined Fox News’ “Ingraham Angle” on Tuesday to announce that millions of Canadians are marching to Canada’s capital to demand that Trudeau either resign or lift all the tyrannical COVID mandates.

“Right now in Canada we have one of the biggest revolutions happening, and you probably haven’t heard about it because no one’s talking about it,” Fleury told host Laura Ingraham, referring to the mainstream media.

“But right now there’s 50,000 truckers and about 1.4 million people headed to the parliament in Ottawa, and they’re going to stay there until Trudeau resigns or they give us back all our freedoms and rights.”
Click to expand...

Fleury insisted Canadians have become unified on a level previously unseen in their contempt for Trudeau and his draconian COVID policies they’re suffering under.
Click to expand...

“What we’re seeing in the country right now with these truckers, honestly, it has ignited the whole entire country of Canada,” Fleury said. “Even I, a big tough hockey player have shed a few tears because I haven’t seen my country this behind something and this excited about something in a very, very long time.”
Click to expand...

Meanwhile, a large convoy of American truckers from South Carolina and elsewhere in the States are joining with the Canadian truckers at the border.

Meanwhile, a large convoy of American truckers from South Carolina and elsewhere in the States are joining with the Canadian truckers at the border.
View attachment 54116
Click to expand...

My guess is the only way these so called Canadian authorities will deal with this Ottawa gathering is with a false flag. Agent provocateurs enacting some kind of harm to others and destruction of property, switching the narrative from reality, making out this so called authority equals order and anyone opposing it equals chaos. The attention is all on the chaos of “anti vaxxers” but will the masses fall for this so obvious and repetitive ploy? I hope not

FOTCM Member
This one just blew me away.

They say a picture says a thousand words. Well, talk about summing up the past 2 years in one image.

The dollars. The filthy, tattered looking rug. The demonically possessed mayor of Chicago, looking like Bill Gates' twin. The posture. Too good.

Another important statement by Vera Sharav available in English (+video), French, Spanish, German and Italian.
In a speech delivered Sunday, January 24, 2022 in Brussels, Holocaust survivor Vera Sharav described the striking parallels between what she witnessed as a child in Nazi-controlled Romania, and COVID policies being enacted today by governments around the globe.

Holocaust Survivor: Never Again Is Now. Unless We All Resist

I don't know what enforcement powers the EU watchdog has, but I'm very glad someone in the EU had the courage to pursue the matter:
----- 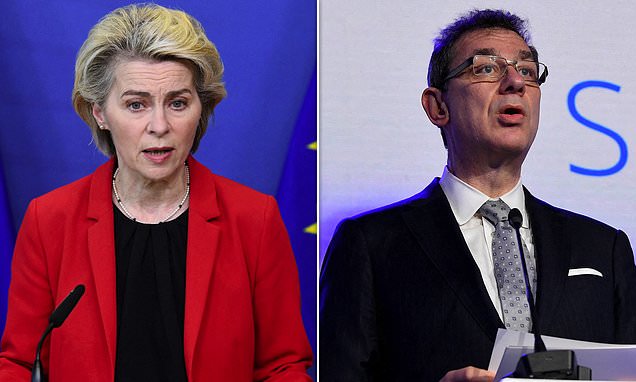 The EU ombudsman, Emily O'Reilly, issued a formal recommendation telling von der Leyen's office to search for and hand over the texts under a freedom of information request.

The EU ombudsman, Emily O'Reilly, issued a formal recommendation telling von der Leyen's office to search for and hand over the texts under a freedom of information request.

Pierre said:
"Here is the reaction of children in Israel when the teacher tells them that they no longer need to wear masks"

yeah, my son does thing like that in school but they still have to wear masks

FOTCM Member
Comedian Adam Carolla slammed the media over their demand that Joe Rogan be censored for pushing “misinformation,” asking them, “What have you guys been right about?”

NewEngland Seeker said:
A shout out to the original convoy.

Mad Max was another convoy I never get bored watching.

NewEngland Seeker said:
A shout out to the original convoy.

LOVED this film as a kid whenever it came on tv back in the 1970's! I have a copy on dvd and will be watching it again tonight!

Administrator
Moderator
FOTCM Member
For more than a year the Patriots organized demonstrations every week. The last one was today (Saturday) in Paris. They were ten of thousands demonstrators:

FOTCM Member
Apparently they are dropping all Covid restrictions in Denmark from this coming Tuesday, February 1st. No mask wearing anywhere, I don't know about the INT airport, though. They might have their own rules. What this will mean in reality, the small print, I don't know. I shopped this afternoon without a mask, as I have done for a few weeks now, but many people still wore the little attachment. I guess they follow the rule and wait until Tuesday.

Here are some headlines, as they appear if translated into English:
Berlingske.dk

Goodbye corona and hello to the maybe most important question
What happens when Denmark as the first country in the Western world drops all coronary restrictions? One thing is sure: It will not be normal, we will return to. Corona still puts the agenda for our working life in a wide range of areas, and without restrictions, it leaves an important issue we all have to consider.
Click to expand...

I don't know yet what they mean by: "Corona still puts the agenda for our working life in a wide range of areas".

Now the Swedes salute us: 'This time Denmark chooses the right path and acts wisely'
Click to expand...

This week's coronatal explained: It's over with restrictions, but a few million of us probably still need to be infected
Although the corona is no longer socially critical, the epidemic is still here.
Click to expand...

I wonder if these steps will influence the trucker protests in countries that still hold on to restrictions. Let's hope it quickly eases everywhere and does not come back when it is so clearly not necessary.

There are many unanswered questions. Will people brush them under the carpet and move on, or will some reflect on what happened. And what about all those damaged by vaccines. What is the next campaign to scare and intimidate people? Or will it come more through the hand of Nature? What will the pharmaceutical companies cook up if their scam is cancelled? We will see.

The truckers convoy in Italy is from September last year.

As far as I know at the moment there are no italian truckers protesting against the italian deep state draconian rule though I hope that if the protests will increase and spread worldwide that sooner than later the good italian people will start protesting too, more loudly this time since the italian PTB are pretty deaf at the moment.

alkhemst said:
My guess is the only way these so called Canadian authorities will deal with this Ottawa gathering is with a false flag. Agent provocateurs enacting some kind of harm to others and destruction of property, switching the narrative from reality, making out this so called authority equals order and anyone opposing it equals chaos. The attention is all on the chaos of “anti vaxxers” but will the masses fall for this so obvious and repetitive ploy? I hope not
Click to expand...

I'm with you on this alkemst. I don't want to pour cold water on the growing euphoria that we will soon have them on the run, but I sense that the whole step back from the Covid brink is nothing more than a deliberate bate - an apparent run for the hills when in fact its more likely a trap - a means to draw the opposition out into the open before delivering the next step in their inexorable march.

Its worth remembering that the instigation of Operation NEW NORMAL began with 9/11. That was when the term and policy was first openly weaponized. e.g.

Americans Sense a "New Normal" After 9/11

PRINCETON, NJ - Americans' current perceptions of the effect the 9/11 attacks have had on the United States and on themselves, personally, are similar to what these perceptions were on the first anniversary of the attacks. Even four years after the attacks, an Aug. 28-30 CNN/USA Today/Gallup poll finds most Americans feeling that neither the country nor their own lives have fully returned to normal since terrorists killed nearly 3,000 people on Sept. 11, 2001.

While these evaluations haven't changed since 2002, Americans appear a bit more pessimistic now than they were then about the likelihood that normalcy will ever be fully restored to the country or to their own lives. Nearly two-thirds now say the country will never completely return to normal, while close to half say the same for themselves.
Click to expand...

So that's at least 20 years of open warfare against the world's population/pre-existent reality; all that time to further prepare below the surface....

Synthetic Environment for Analysis and Simulations

... to run multiple scenarios, to war game the results (we have already leaned just how many they prepped for COVID and how during which they anticipated and prepared for kick back and opposition, and how they incorporated the same into their planning for moving to the next phase).

We should do well to remember that operation COVID was thus but the next phase in a total, full-spectrum dominance campaign. They will shortly be moving onto whatever is intended to move the flag further up the mountain from this particular staging post. After all following the 'victory' at the US Supreme Court regarding the illegal vaccine mandates the United States Department of Labor, Occupational Safety & Health, informed everyone:

The U.S. Department of Labor’s Occupational Safety and Health Administration is withdrawing the vaccination and testing emergency temporary standard issued on Nov. 5, 2021, to protect unvaccinated employees of large employers with 100 or more employees from workplace exposure to coronavirus. The withdrawal is effective January 26, 2022.

Although OSHA is withdrawing the vaccination and testing ETS as an enforceable emergency temporary standard, the agency is not withdrawing the ETS as a proposed rule. The agency is prioritizing its resources to focus on finalizing a permanent COVID-19 Healthcare Standard.
Click to expand...

In other words the bio-security state is both here to stay - forever - and is at this time merely finalizing its plans to make that a Fait accompli. Covid was simply a bridging stage, a first openly pursued stepping stone in that process. The worst is therefore still to come.

Like the events in Washington Jan 2021, I would expect this whole trucker movement to potentially lead to something already long in preparation for just such a tactically necessary moment.

Always expect the unexpected. Especially as the environment up above us is hotting up so fast.